We're up to six characters now.

The latest trailer for the new Guilty Gear shows off two more characters who are coming back for this upcoming release.

The game, which was revealed during Evo 2019 with a trailer featuring Sol Badguy and Ky Kiske, has been slowly unveiling its cast across a series of trailers. We found out that May is returning to the series not long after its initial reveal, as well as Axl Low. Now, in anticipation of a playable demo popping up at fighting tournament Arcrevo America 2019, two more fighters have been revealed.

First up is Chipp Zanuff, who appeared in the first game in the series as well as numerous sequels. He carries an arm-blade, as well as various ninja tools, such as a kunai and shuriken. He's looking extremely jacked, and he'll be able to divide himself up and attack as multiple copies of himself.

Potempkin is also shown off for the first time in this trailer. He's another character who originated in the first Guilty Gear, and while he might look like a robot there's actually a person under all that armor. Based on this trailer, it looks like he'll have a lot of range with his attacks, although his size could also make him an easy target.

The most recent game in the Guilty Gear series, Guilty Gear Xrd: Rev 2, released in 2017. The final name for the new Guilty Gear has not yet been announced, but it will release on PlayStation 4. 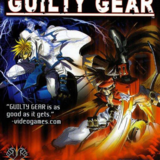