The Messenger Prequel, Sea Of Stars, Gets New Trailer

The new Sea of Stars trailer is a gorgeous homage to JRPGs of yore.

Developer Sabotage Studio, the team behind the critically acclaimed action-platformer The Messenger, has shared a new trailer for its upcoming game. The trailer for Sea of Stars, which is a prequel to The Messenger and is embedded below, shows what we can expect of its gameplay when it drops sometime in 2022.

The trailer has a very Chrono Trigger vibe to it, as we get to see exploration from both the traditional map and the overworld. We also get introduced to three of Sea of Stars' six playable characters, as well as a look at some puzzle-solving and turn-based combat.

Sea of Stars was revealed earlier this year through a Kickstarter campaign. The game is billed as a throwback to the 16-bit era of JRPGs, which brings to mind titles such as Chrono Trigger and Super Mario RPG. While it's unclear how two of the three confirmed playable characters--Valeria and Zale--fit into The Messenger's universe, they did make an appearance in the game during the Sunken Shrine dungeon. Sabotage said this was a direct reference to what was next for the studio.

A release date and planned platforms have yet to be officially announced, but Sea of Stars is scheduled to launch in 2022 for consoles and PC. 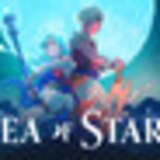