The Lord of the Rings: The Return of the King E3 2003 Preshow Report

Last year's action game from EA based on the film version of The Lord of the Rings: The Two Towers provided a surprisingly robust, well-rounded combat experience detailing the events of the first two movies, and this year the company is developing a follow-up based on the final movie in the trilogy, The Return of the King. As EA's games are based directly on Peter Jackson's films, they feature the likenesses of the principle actors, including Elijah Wood as Frodo and Ian McKellen as Gandalf. Additionally, the game will share its visual design elements with the film.

After the defeat of Saruman and the forces of Isengard, the attention of the broken Fellowship of the Ring has turned collectively toward Mordor and the final destruction of the One Ring. You'll be able to play as eight different characters in various areas taken directly from the movie, such as Gandalf as he helps defend Minas Tirith during the Battle of the Pellennor Fields; Aragorn, Legolas, and Gimli as they traverse the Paths of the Dead; and Frodo and Sam as they strive to reach the fiery cracks of Mount Doom while opposed by the evil hosts of Mordor. In an improvement on The Two Towers, The Return of the King will allow for cooperative play in some areas. The game will also feature enhanced control, allowing you to use the right analog stick to perform multidirectional combo attacks.

The Return of the King will feature voice acting by the cast of the film and elements of Howard Shore's exemplary musical score. Additionally, players who don't mind seeing a bit of the film early will find cinema scenes featuring footage from the upcoming film. It looks as though The Lord of the Rings: The Return of the King is shaping up to be another tour de force action game based on the ongoing film saga, and we'll bring you more information as soon as it becomes available. 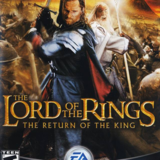 The Lord of the Rings: The Return of the King
Follow

View Comments (1)
The Lord of the Rings: The Return of the King