The Long-Sold-Out Legends Ultimate Arcade Cabinet Is Back In Stock, Comes With 300 Games

AtGames' Legends Ultimate Arcade is $50 off at Walmart.

AtGames broke into the arcade market last year with lofty ambitions. It released a huge Legends Ultimate arcade cabinet that had a huge amount of games on it. Unfortunately, disruptions in manufacturing caused by the coronavirus pandemic slowed production to a crawl, making the cabinet extremely difficult to find. It's been out of stock for months now, but AtGames recently announced a re-release that's available now at Walmart for $550--50 bucks off its list price. GameStop and Sam's Club also carry the Legends Ultimate, but it's out of stock at both retailers at the moment.

AtGames is mostly known for its officially licensed Atari Flashback consoles and other plug-and-play systems. The Legends Ultimate is decidedly more expensive than AtGames' earlier retro products, but it's also a full-size cabinet packed with hundreds of games and unique features you don't typically find in home cabinets. 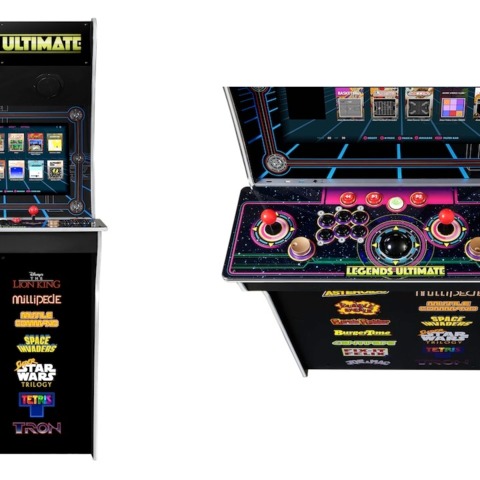 See at Walmart
See at GameStop (out of stock)

You can check out the full list of games on AtGames' site. Games are played on a 24-inch HD LCD monitor, with sound coming through the down-firing stereo speaker.

The Legends Ultimate has a variety of control inputs to support its eclectic library of arcade and home console classics. Each cabinet has two joysticks, a trackball, a pair of spinners, and two sets of six buttons (ideal for multiplayer). You can also get third-party controllers to work via USB/Bluetooth.

Separating itself from some other modern cabinets, the Legends Ultimate has built-in Wi-Fi and an ethernet jack to view global leaderboards, livestream your gameplay, and download new updates. It also has an add-on tool that lets you load more games, or even make your own titles to play on your Legends Ultimate cabinet. And for those who like tinkering with Raspberry Pi, you can pair it with the Legends Ultimate over Bluetooth.

In addition to all of the onboard games and customization options, the Legends Ultimate has an optional subscription service called ArcadeNet ($20 per month), which gives you access to a growing library of games. You can also stream games from cloud servers and your own PC games with the Bring Your Own Game feature--it does cost $1 per hour, though.

AtGames' Legends Ultimate is part of the growing trend of home arcade machines boasting hundreds of games and customization features. It's joined by the upcoming iiRcade cabinet, which has a Sega license and shattered its Kickstarter goal recently. SNK also just revealed the Neo Geo MVSX, which comes packed with 50 classic Neo Geo and SNK arcade titles. The Legends Ultimate is certainly aimed at retro gamers, and if that's you, don't forget to check out our complete guide to retro gaming in 2020.