The Long-Lost Developer Of Wabbit, An Early Groundbreaking Video Game, Has Been Found

Wabbit is believed to feature the first playable and named human girl character on consoles and the developer had seemingly disappeared in the decades since.

The Video Game History Foundation has finally found the developer of Wabbit, which is believed to be the first console game to feature a playable human girl as the lead.

In 2021, Polygon ran an article about the Video Game History Foundation's search for Wabbit's developer in conjunction with Kevin Bunch, a video game historian who maintains the Atari Archive, and A Critical Hit's Kate Willaert. However, all that they had on the developer at the time was that she was a Vietnamese woman named "Ban Tran," which turned out to be a fairly common name in Texas, where she developed Wabbit and another unreleased game. As Bunch put it when talking to Polygon, soon after working on these projects, Tran became "something of a ghost," making her particularly difficult to track down.

It turns out that they were one letter off and that her actual first name was Van. Van Mai (as she now goes by a married name) was found when a member of the search effort's Discord decided to look through the bankruptcy records at the National Archive in Texas. Since most of her colleagues at Apollo, where she made Wabbit, had to file for royalty checks following the studio's bankruptcy and closure, it was assumed that records of her could be found there, and they were correct. Following Mai's discovery, the Video Game History Foundation was able to catch up with her and speak about her time in the games industry.

Mai immigrated to America near the end of the Vietnam War and settled in Dallas, where she later got her GED and certification in programming and helped program learning computers for the Dallas Independent School District. When her job there was cut, she applied to and began working at Apollo, where she eventually developed and released Wabbit. Wabbit featured Billie Sue, who is believed to be the first human girl protagonist in console video games, chasing off rabbits trying to eat her farm's carrots.

Mai wouldn't end up making too many more games, working an unreleased home conversion of the arcade game Solar Fox at another studio following Apollo's bankruptcy. After leaving that studio, she moved to California to get a computer science degree and eventually found work at a telecommunications company. Mai currently works in banking, but admitted to the Video Game History Foundation that she has sometimes thought about returning to development. 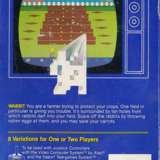