The Legend of Heroes III: Song of the Ocean Hands-On

We explore the world of Weltluna in a near-finished version of Nihon Falcom's upcoming role-playing game.

Nihon Falcom's latest role-playing game for the PlayStation Portable, The Legend of Heroes III: Song of the Ocean, is currently scheduled for release in North America toward the end of this month. We recently received a near-finished version of the game, and so ahead of our full review, we've spent several hours playing through the beginnings of the adventure in order to bring you some early impressions.

Song of the Ocean is set in the same fantasy universe as the previous Legend of Heroes games and sees you assuming the role of a young musician named Forte. You'll spend the first hour or two exploring your hometown of Racos Palma, where conversations with other characters do a good job of letting you know who Forte is, who his friends are, and why he feels compelled to follow his grandfather--a well-respected troubadour--around the world on an adventure prompted by his recent acquisition of a magical map. The map is said to show the locations of a number of artifacts known as resonance stones, which were deliberately scattered all over the world so that the mysterious musical power that they're the key to would never be uncovered.

When you leave your hometown in search of the stones, you'll find that the potential for exploration is somewhat limited, since paths invariably (at least those that we've traveled to date) lead to neighboring towns and cities with very little deviation. What you will find on your travels between towns are plenty of monsters to do battle with, and the way that Song of the Ocean deals with these encounters is undoubtedly one of the most interesting features of the game thus far. Rather than force you into randomly generated battles against monsters that aren't visible until you're already in a fight with them, the game gives you an opportunity to avoid unwanted encounters simply by avoiding the monsters that you see onscreen. It's not always that easy, though, because monsters that are more powerful than you will actively chase you. The flip side is that weaker monsters will be hesitant to approach you and, in some cases, will even run away. A colored icon above the head of each monster (which will have turned into a small group of monsters by the time you enter the combat phase) lets you know whether you've been spotted by the monster or not, and by sneaking up on unsuspecting monsters you can gain a surprise attack advantage.

From what will ultimately be a party of six characters, you can control up to four combatants in battle. The battles in Song of the Ocean are turn-based, but their lack of party formations or grid-based arenas makes them quite unlike those in the majority of RPGs. The area that you fight in will be the same area in which you encountered the monsters, though with the camera zoomed in much closer so that individual party members and enemies (as opposed to just one member representing each group) are clearly visible.

When deciding on a course of action for one of your characters, you'll notice that colored circles representing their movement and attack ranges appear on the battlefield. Your enemies are every bit as capable of moving around the environment as you are, and it's also worth noting that they'll be pushed back slightly every time they're attacked, so it's important to bear those things in mind when queuing up your orders. In addition to a basic attack command, you can tell your characters to use items, cast spells, use any special skills that they've learned, or simply move to another part of the map and assume a defensive posture. The number of spells and skills available early on is predictably limited, but we've already learned a good mix of ranged attacks, defensive skills, and healing abilities. Furthermore, all characters in your party have a powerful finishing move, which can be activated at any time when their power meter is full.

Intriguingly, your party will be accompanied at all times by a pet of sorts, and although you won't get to control it directly, that doesn't mean it can't be very useful in battle. Our party, for example, has a pet rabbit following us around at the moment, and since we started feeding it items from our inventory, it has taken to healing our entire party during battle every now and then. Pet abilities will purportedly vary according to what the animal eats and how it is treated, but we haven't had much of an opportunity to experiment with this aspect of the game just yet. Look for more information on battle-ready bunnies and other features of The Legend of Heroes III: Song of the Ocean in our full review closer to the game's release. 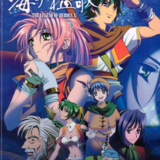 The Legend of Heroes III: Song of the Ocean
Follow

View Comments (12)
The Legend of Heroes III: Song of the Ocean