The Hardware That Never Was

Nintendo, Sony, Microsoft, and Sega patented these game systems and controllers, but stopped short of releasing them.

There's little more tantalizing for gamers than what might have been. What if the Nintendo-Sony partnership on the Super Nintendo CD add-on didn't fall apart, causing the two to become console war rivals? What if Sega hadn't pulled out of the hardware race after the Dreamcast? What if Atari had given its game developers credit instead of alienating its best and brightest until they left to form Activision?

While we don't always have great insight into the roads not taken by console makers, they do give us glimpses here and there. For instance, Nintendo, Sony, Microsoft, and Sega have all patented much of their hardware, either in function or in form factor. We dug up some designs from the last three decades and asked each of the companies to tell us about their old plans and why these items apparently never made it to market. While they were uniformly unhelpful on that front, there's still room for speculation. We've given our idea of the purposes and pitfalls of these abandoned accessories, but chime in and set us straight or offer your own theory as to why these particular roads turned out to be dead ends.

This was quite possibly the first and last time Nintendo met a portable redesign it didn't like enough to put in stores.

The GameBoy With a Girlish Figure

These days, Nintendo reflexively redesigns its portable hardware every year or two and gives it more makeovers than Sally Jessy Raphael in sweeps week. [Feel free to insert a more era-appropriate reference of your choosing here. -Ed.] However, it wasn't always so. Nintendo introduced the original GameBoy in 1989, but didn't even release the system in different colors until the 1995 Play It Loud series debuted with an assortment of extreme/obnoxious colors like green and yellow, along with a transparent system that let players get a glimpse of the GameBoy's innards.

Nintendo apparently considered a hardware refresh well before then, as the company filed a patent application in 1992 for this curvier design of a portable gaming system, which seemed to keep all the key parts in the same place (except for the headphone jack). Interestingly, in Leonard Herman's exhaustive reference book Phoenix: The Fall & Rise of Video Games, he details a rumor making the rounds at that year's Winter CES of a new color GameBoy that would have been backward compatible with the existing GameBoy library and retailed for $99. The GameBoy Color would eventually become a reality, but not until 1998, when it hit shelves around the world with a $79 price tag.

Finally, a $5,000 coin-op machine that brings the feel of playing at home into the arcades!

The NES made its way into arcades by way of the PlayChoice 10 multi-game system, and this patent (filed for in March of 1992) suggests plans had been under way for a coin-op follow-up based on the Super Nintendo hardware. This mock-up of the arcade unit's controller replaces the small rubber start and select buttons of the NES and original SNES pads with full-size face buttons, no doubt because such easily torn pieces would not stand up to the wear and tear of a typical arcade environment. The arcade controller also replaces its console counterpart's lengthy L and R shoulder buttons with smaller inputs. However, they may have actually been easier to press given that the top angle of the pad is steeper than that of the original SNES controller, so fingertips could naturally rest on the buttons. It's stunning to think we could have lived in a world where people could play through classics like Final Fantasy VI at a rate of a quarter for every two minutes of game time…

[CORRECTION]: The coin-op Super Nintendo actually did see release as the Nintendo Super System, and allowed players to sample a variety of the console's offerings, including Super Mario World, F-Zero, and Super Tennis.

The original NES controller was iconic, but not exactly comfortable to hold.

The original Nintendo Entertainment System controller is as iconic as it is uncomfortable. The hard plastic rectangle certainly got the job done, but it wasn't exactly easy on the hands. Nintendo addressed this in the fall of 1993 with a more rounded controller that came packed in with the top-loading redesign of the NES hardware, but the company also received a patent for a different NES controller design that same year. The alternative redesign of the NES pad closely resembles the original rectangular pad, but with one key difference: there are two semi-cylindrical extensions on the back of the pad that would seem to curve along with players' fingers, giving the pad a bit more bulk for larger hands. Although such protrusions weren't often used at the time, they've become a staple of console pads in recent years, with Sony, Microsoft, and Nintendo all adding them to their standard gamepads.

This Saturn-era pad hid six buttons on the back of the controller, which might have made for a whole new way to play Street Fighter II.

This Sega patent for a Saturn-era gamepad is notable for the way it flaunts console controller convention. First of all, it has taken all of the face buttons and put them on the back, where it's debatable if they can even be called face buttons! And what takes up the spot on the front of the controller opposite the D-pad where the face buttons usually go? Why, another D-pad, of course! It's unclear what Sega had in mind for a second D-pad when this patent was filed for in March of 1996. At that point, only Nintendo's doomed Virtual Boy had incorporated a twin D-pad setup. While Sega had a Saturn virtual reality headset of its own in the works at the time, a former Sega employee who had tested that hardware told GameSpot he didn't recognize this controller design as anything related to that project. Later in 1996, Sega would introduce a new Saturn controller with multiple directional inputs for Nights into Dreams. However, that controller kept the face buttons on the controller's face and featured an analog stick as the second input instead of a second D-pad.

It's like seeing an old friend again, only to discover they've since tattooed a giant spider on their face. The same, but different.

The twin analog stick layout for Sony's original PlayStation DualShock controller was so popular that the company kept the same design for the PlayStation 2. And when they tried to switch things up by unveiling a "Batarang"-style controller for the PlayStation 3, consumer backlash was so swift and vocal the company wound up releasing the decidedly DualShock-esque Sixaxis controller with the system instead. And when that wasn't deemed close enough to the beloved DualShock, Sony gave up, tossed a couple of vibration motors in there, and called it the DualShock 3.

But Sony tried a number of different variations before settling on the twin analog stick configuration it would wind up using to this day. The most interesting twist has the analog sticks extending from the top of the pad instead of nestled in between the hand grips. While it has a certain visual flair, having the sticks angled toward the user instead of flush with the face buttons doesn't sound like it would be comfortable for every type of game. First-person shooters seem especially tricky with the thumbs apparently extended further out than the index fingers would be for firing with the shoulder buttons. The other analog stick ideas are interesting in their own right, with the DualShock mushroom-capped sticks replaced either by arcade-like lollipop bulbs or bullet-shaped nubs.

One small step for a D-pad, one giant step backward for controller aesthetics.

One of the loudest complaints about the original Xbox 360 controller concerned its dreadful D-pad, which made precision movements in games like Lumines and Street Fighter II nearly impossible. Two years ago, Microsoft unveiled a new version of the controller with a transforming D-pad that largely addressed those complaints, but the company might have considered a number of alternatives in the meantime. Take this patent Microsoft applied for in 2008. The art shows an Xbox 360 controller that's more angular than the standard pad that currently ships with the system. The square D-pad stands out as a pronounced departure from Microsoft's previous pad, and the shoulder buttons look to be configured more like those of a PSP or PS Vita than the bumpers on the standard Xbox 360 controller. 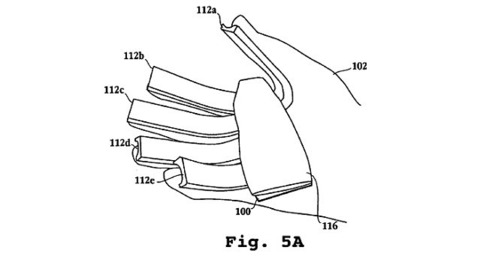 Control in the palm of your hand!

It's like the Power Glove all over again! Or Johnny Mnemonic! While most of the patents in this feature simply covered the form factor of never-produced products, this Sony Computer Entertainment patent actually covers the function of the device itself. Filed in 2006, the "hand-held computer interactive device" patent covers a motion capturing controller held in the palm, with protrusions that curve along with the users' fingers. Of particular interest is the way the patent suggests haptic feedback could be implemented to improve the user interface. While there are plenty of possible uses for such a device, the patent supposes one in particular when it comes to games:

For instance, for a game where the user is a pilot, a folded sheet of plastic can be used to simulate the cockpit controls (e.g., the instrument panel can be printed on the plastic or other material), and the user can be wearing the input devices on each hand to enable piloting of the airplane or other vehicle or device. A display monitor connected to a computer, or game unit, allows the user to view the interactions. To begin, the user can touch the four corners of the sheet, which calibrates the positional tracking. For example, the four corners of the sheet can be marked with red crosses to indicate the areas to be touched. A combination of fingertip pressure, positional tracking, and tactile feedback can be used to interact with the game. The game may also include a plastic yoke or joystick that contains no electronics and only serves to constrain or steady the users hands. The game detects the user gripping the controls by a combination of fingertip pressure and finger flex information and then tracks the motion and/or orientation of the hand to interpret the manipulation of the physical controls. The plastic yoke might be designed with the shape of the input device in mind and include, for example, depressions for the central body of the input device to fit in. In another embodiment, the degree of pressure applied when a user squeezes their fingers together is correlated to a tightness of a grip exerted on an object in a video game application being displayed on a monitor.

The patent was granted to SCE in October, but we have yet to see it used for a PS3 project, and we haven't even heard it rumored for use in the PlayStation 4. But considering that's a PlayStation 2 in the patent art, there's a significant chance this idea was shelved years ago. 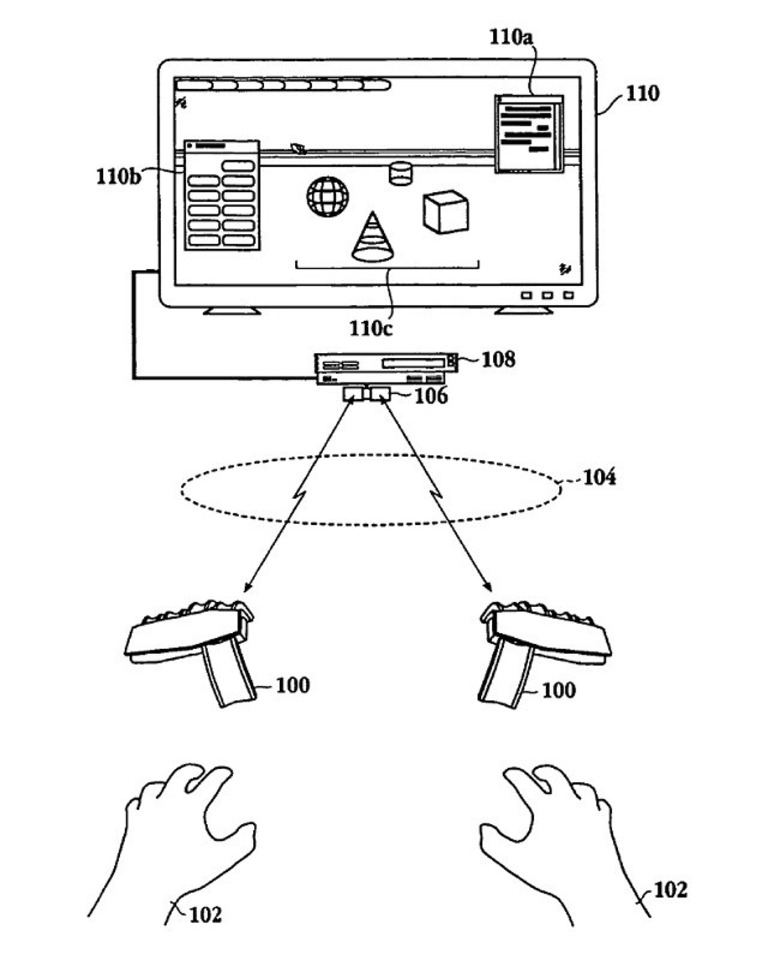