The Greatest Games of All Time: Planescape: Torment

What can change the nature of a man? Find out why GameSpot has inducted the unusual computer role-playing game Planescape: Torment into the Greatest Games of All Time.

What Can Change the Nature of a Man?

Avellone explains that the unorthodox design came from his own experience with RPGs and from "some conventions that [he] wanted to break." Says the designer, "I also didn't want to see any dwarves, elves, or halflings in the world, or magic swords, and I especially didn't want the main character to save the world because I was sick to death of that crap."

According to Avellone, the game's concepts were inspired by numerous sources: "[Nine Princes in Amber author Roger] Zelazny was probably the biggest influence, since he was pretty much the master of writing stories with amnesiac heroes coming into their own. If I had any other influences they would be Bill Willingham['s comic book series] The Elementals, [which] made me want to do a game with a main character who could lose body parts and grow them back."

"Annah and Fall-From-Grace were inspired by Betty and Veronica from Archie comics, embarrassingly enough. The rest of the influences just came from Planescape itself and from all the computer RPGs I'd played...the conventions I had seen over and over I wanted to play around with and try and turn them on their head--rats as dangerous high-level bosses, few to no swords, death as a puzzle-solving tool, a character who collects memories instead of just items, new types of inventory slots like eyeballs and earrings, etc."

Fans of the game might be interested to know that the writer's own personal favorite sections of the game include "exploring the Circle of Zerthimon with Dak'kon, the whole conversation with Ravel, the PC's previous adventuring party, Morte's revelation to the player, and the player's unlocking the bronze sphere at the end to reveal the truth. Any [dialogue] with Annah and Fall-From-Grace was a lot of fun to write as well."

If you were really looking hard for things to hold against 1999's Planescape: Torment, you could cite its dated 2D graphics, its bugs (like a memory leak bug in the original version that caused the game to eventually slow to a crawl before this issue was patched), and all the written text it used instead of onscreen action to convey what was going on. We're here to tell you where you can put those things. No, seriously, we're here to explain why this highly unusual role-playing game is one of the greatest ever. But if you haven't played the game before, be advised that this article may contain spoilers.

The game's story focused on an ancient immortal character, known simply as "the Nameless One," who begins the game by waking up on a mortuary slab with a severe case of amnesia in a strange city. The setup may sound familiar to you (it's borrowed from the 16-bit console RPG Shadowrun), but despite this bit of inspiration, and others lifted from such sources as console role-playing games, American comic books, and author Roger Zelazny's Nine Princes in Amber novels, the game ended up being entirely unique. Your character wasn't just forgetful; as it turned out, he was immortal and had been around for many more years than he knew. The Nameless One's body was covered in a thick layer of ancient skin and scars from countless scuffles, yet each time he was "killed," he would somehow return to life without the memories or identity he had in his previous "lives." As you found out later, he had actually been incredibly influential in matters of politics, had engaged in key battles that decided the fates of entire worlds, had bargained with godlike beings, and had also been a liar, a cheat, a saint, and a homicidal maniac (among other things).

To say that the game was unorthodox is an understatement. It's true that some of the game's situations and characters (like the Nameless One's party, which included a floating skull, a clockwork automaton voiced by Homer Simpson actor Dan Castelanetta, a half-demon thief, and a full-on demon committed to being orderly and civilized) seemed intentionally designed just to be contrary to the established high fantasy of Dungeons & Dragons. But a lot of what the game did differently was also handled quite well, like how the Nameless One had three different character professions--fighter, thief, or wizard (which he could freely switch to at any time)--yet the game didn't force you to hack and slash as most other RPGs did at the time. You could also change your character's ethical alignment from neutral to good to evil to lawful to chaotic, depending on your actions, whether you lied, stole, killed indiscriminately (or to exact justice), or kept or broke vows. (We should also mention that Planescape: Torment has quite possibly the best implementation of role-playing an evil character ever to appear in a computer or video game to date.) As another example, the denizens of the Planescape universe speak something referred to as "the Chant," sort of a modified English Cockney dialect with several specific terms. By the end of the game, you'd be fluent in it, no matter how unfamiliar you were with the universe.

What Planescape: Torment did emphasize was its story and premise, and it did so in a very intriguing way. The protagonist, the Nameless One, was immortal and apparently had the ability not only to recover from injuries, but also to somehow grow back or recover severed limbs. Later on in the game, you could experiment with injuring or even killing off the character (which was, at the time, unheard of--most fantasy role-playing games back then were an exercise in avoiding death). More importantly, the game told a very unusual story with plenty of twists and turns. Unlike in most other fantasy games, you weren't a handsome hero in shining armor looking to save the world; you were a grotesque character in a hostile and bizarre place just trying to find out who you really were. If you couldn't make this discovery, the Nameless One would continue to suffer the same fate--dying, rising from the grave, and losing his memories over and over again, and never finding out why. Yes, you had to read most of the dialogue and narrative in written word, but when you did, you'd find that the story unfolded with lots of gaps--some subtle, some obvious.

That's right, Planescape: Torment left many, many things open to interpretation, even though the writing was both concise and very descriptive. Over the course of the game, you would find yourself mentally filling in the blanks about what all the half-remembered memories and vague conversations with crucial characters really meant. How did the Nameless One recover from losing limbs? How long had this been happening to him? Just how old was the Nameless One, anyway, and what was his real name? As a result, toward the end of the game, many fans felt a strong personal connection to the Nameless One, even though the game was pretty linear. Because so much of the character's story came from your own choices and interpretations, you would eventually make the Nameless One's story your own. Despite its flaws, and by virtue of its unorthodox design, innovative gameplay, and distinctive story and writing, Planescape: Torment has rightfully claimed its place among GameSpot's greatest games of all time. 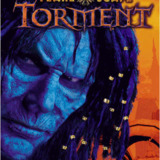