The Greatest Games of All Time: Master of Orion

The Greatest Games of All Time: Master of Orion

Ridding the Galaxy of Klackons, One Solar System at a Time 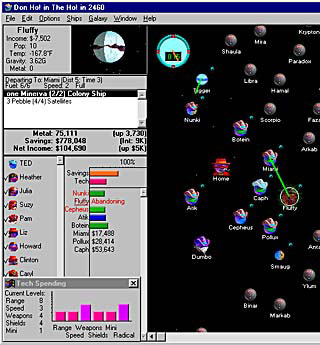 I'm a Master of Orion addict from the earliest days, but even I have to admit that I've often felt that MOO owes a lot to a little-known Mac strategy game known as Spaceward Ho! Released in 1991, Spaceward Ho! beat MOO to the market by a couple of years, and yet it has many of the same gameplay elements that MOO is famous for. Both featured little micromanagement, as you simply moved sliders to allocate production and research. Both also let you design your own starships by mixing and matching components. And, of course, there was the entire conquer-the-galaxy thing. I had played the heck out of Spaceward Ho! in college, and when I picked up MOO for the PC, I couldn't help but be struck by the resemblance.

So why did Spaceward Ho! never really take off? Well, it sure didn't help that we never saw a Windows version of the game until 1997, and by then, the series' unique gameplay didn't seem that unique. It also didn't help that the offbeat and colorful style of Spaceward Ho!, though well suited for the Mac crowd's image of itself, didn't translate to the much more serious-minded PC gamer. Still, if you can find a copy of Spaceward Ho! for cheap, it's definitely worth checking out.

Master of Orion wasn't the first space strategy game, nor was it the last, but for many gamers it's easily the only space strategy game that really counts. And while it's tempting to think of Master of Orion as simply Civilization in space, it was far more than that. MOO, as it's affectionately known by its many fans, is still one of the most beloved and popular strategy games of all time, thanks to its addictive and deep gameplay and rich setting.

Pick up Master of Orion today and it's startling. We've become so adjusted to the frenetic pace of real-time strategy games and all their complexities that you're almost lost as to what to do in MOO. Aside from an admittedly difficult interface, the game is a throwback to the idea that simpler is better. There is no micromanaging of planets, or build queues, or any of the things that we've now come to expect from strategy games today. There is just a set of sliders that lets you allocate the percentage of a planet's production toward shipbuilding, research, terraforming, and industry. On top of that, the game can automate many of these functions, so when you uncover a new tech that lets you expand the population size of a planet, you can simply let the system handle those tasks for you and you can focus just on the strategy.

And, as a strategy game, Master of Orion is still unparalleled, even today. Yes, the basic gameplay is similar to those of other games, notably Civilization, in that your goal is to guide a faction to total domination using a variety of means, including military and diplomatic. However, Master of Orion uses many of its own conventions that remain unique to this day, and which help keep the pace of the game flowing. We've already noted the lack of micromanagement, but MOO has an excellent research system, tied closely in to the combat system. In MOO, you design your own ships, using whatever technology is at hand and balancing how much space is available on your ships. This creates a cunning rock-paper-scissors game, as you constantly have to adjust your designs to counter for an enemy's technology. Each race in the game is distinctly unique, and years later, it's easy to remember those expansionist Klackons, the belligerent Bulrathis, and the sinister Darloks.

It's hard to believe that Master of Orion was released 12 years ago. In 1993, the golden age of MicroProse was coming to a close, and yet the famed publisher still had some legendary games left up its sleeve. The only difference is that while MicroProse developed many of its early hits internally, it relied on outside developers to create many of its later hits. This included Master of Orion, which was the brainchild of the SimTex Software, the now-defunct Texas studio that also created the equally beloved Master of Magic.

Twelve years after its release, Master of Orion leaves with us a mixed legacy. In addition to the classic original, MOO spawned two sequels--one that was truly worthy of the name, and the other was about as big of a disappointment as you can get. Master of Orion II: Battle at Antares was a magnificent sequel, though it introduced a vast amount of micromanagement to the gameplay. Master of Orion III, on the other hand, is akin to the Heaven's Gate of PC strategy gaming. It arrived in 2003 after much development and to greater anticipation, only to dash all the hopes of fans and gamers alike with incomprehensibly bad and busted gameplay. Even after it was supposedly patched, the bizarre design decisions that went into that game make you wonder about the sanity of the people responsible for it. Yet it's saying quite a bit about the original that, despite the very sour taste that Master of Orion III left in our mouths, we still look forward to the day that someone takes a stab at making Master of Orion IV.