This clever, beautiful, and unique adventure game is truly one of the best games that the genre has ever had to offer, and reminds us sadly that adventure gaming may be dying rapidly, but it's never going to be forgotten.

The Girl in the Tower

King's Quest VI through the ages

King's Quest VI was the last game in the series to be released on floppy disc, coming out on a whopping eleven 3.5" floppies in late 1992.

The following year, the game was released on CD giving players the opportunity to hear professional voice actors perform the entire game, as well as a full version of the song created exclusively for the game, The Girl in the Tower.

Owners of the original game might remember receiving a pamphlet along with their copy which listed the names and numbers of all the radio stations which had been sent The Girl in the Tower so that they could call in and request to hear the King's Quest VI theme on the radio. Unfortunately (or maybe fortunately) that didn't seem to take off.

In the late 1990's a compilation of the first seven King's Quest games was released in limited quantities and which has been highly sought after on trade sites like eBay since then.

2006 marks the rerelease of a number of the old Quest collections compatible with Windows XP for approximately $20. If you've not yet had the opportunity to play King's Quest VI, now's as good a time as any, and as one of the Greatest Games of all Time, it still hasn't lost one ounce of its appeal.

Sierra's King's Quest series is responsible for not only kickstarting the 3D adventure-game genre, but putting the company on the map. In the heyday of adventure gaming, when Sierra made most of the greats, it was King's Quest that paved the way for the Police Quests, Space Quests, and the Quest for Glory games. But originality wasn't even the series' greatest achievement. Over the years, the games continued to improve (until they stopped improving, that is), reaching their absolutely finest hour in the sixth iteration: King's Quest VI: Heir Today, Gone Tomorrow. King's Quest VI was infused with the best aspects of all the previous games, including a backstory derived from the series' rich canon, a strong tie into mythology and fantasy, and the combined effort of two of the premier designers in adventure gaming, Roberta Williams and Jane Jensen. This clever, beautiful, and unique adventure game is truly one of the best games that the genre has ever had to offer, and reminds us sadly that adventure gaming may be dying rapidly, but it's never going to be forgotten.

Though the games were originally text-driven, King's Quest V and VI abandoned the earlier mechanics in favor of a point-and-click system. Instead of having to adhere to a strict vocabulary in order to interact with the environments and the people around you, you were given the option to use an item, look at, touch, or speak with anything on the screen. You wouldn't be able to write dirty messages and get admonished by the clever auto-response box anymore, but it did make the games more accessible, and it did mean that you wouldn't have to spend any time attempting to rephrase yourself in order to accomplish something. King's Quest V also marked a huge drastic visual change for the series, including the abandonment of the looping map (now you couldn't go south to appear back at the top of the screen), support for 256 colors, and the use of rudimentary motion capture based on real actors. All of these techniques, which were developed for V, were improved even further in VI, including the addition of a fully 3D animated introduction.

Of course, it wasn't just the appearance that made King's Quest VI stand out from its predecessors. The story in this game, and the puzzle solving elements, though always strong, were practically flawless in this game. The beginning picks up virtually where King's Quest V left off, and the young Prince Alexander is dreaming of the girl he met during his father's previous adventure, the lovely Princess Cassima, who's from an island nation so remote that nobody knows where it is. Thanks to the Kingdom of Daventry's magic mirror (the hardest working mirror in video gaming), a glimpse of the young maiden is revealed to Alexander, and he runs off to find her. Though the game is a traditional boy-meets-girl, boy-pines-for-girl, boy-wins-girl back love story; the tale is told in such an interesting, outstanding, and sometimes downright humiliating way that it holds much more appeal than typical damsel-in-distress stories. Alexander and Cassima don't always behave like typical heroes and maidens, a pleasant and expected result from having two female authors on a video game script.

The characters that Alexander encounters along the way run the gamut of personality. From the bickering chessboard queens to the lost dangling participle who asks Alexander "where are you going to?" to the residents of the underworld that like to jam out to "Dem Bones", every NPC whether friendly or hostile offers a little bit of flavor, and often a very big clue as to what's next in store for the adventure. The game's puzzles require the perfect balance of creative thinking and knowledge of ancient mythology that makes them simultaneously challenging and rewarding. Of course, almost most notably, the game offers a number of optional puzzles including two entirely different endings, depending on whether or not you choose to turn young Alexander into a drag queen so that he can get closer to his true love. But the heart of the story leads players through familiar storylines like the tale of Beauty and the Beast, the Minotaur and the Labyrinth, and less familiar plotlines like encountering mysterious druids or going head-to-head against Death himself.

The result of the epic collaboration of Gabriel Knight author Jane Jensen and King's Quest creator Roberta Williams is one of the wittiest, most heartwarming, and entertaining adventure games of all time, one whose puzzles will embed themselves on player's memories far beyond the time that anyone remembers that this game was released on floppy discs. -- Carrie Gouskos 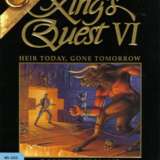