The Future of Gaming: 3D

We take a look at the future of gaming in three parts: 3D, Social Gaming, and DLC.

Where does the future of gaming lie? Will we all be rocking games in 3D? Will all our game purchases be over the Internet? And will social games take over from more "core" titles? In this three-part feature, GameSpot looks at three topics that promise to change the way we play games. Presented over the course of three weeks, The Future of Gaming will look at the rise of 3D titles, the rising importance of downloadable content, and social gaming's impact on the games industry. Contributing to the feature are some of the biggest names in games development, who all share their thoughts, aspirations, and reservations about the impact of these three topics in the years to come. The first topic presented is The Future of Gaming: 3D.

At a panel discussion during this year's QuakeCon, Bethesda lead designer Emil Pagliarulo was asked his thoughts on 3D gaming. His unexpected reply brought the house down. "I f****** hate 3D," he said. "I think it's a gimmick and I hope it dies."

3D remains a delicate subject for game developers. While there are some who have embraced the idea of gaming in three dimensions with unhampered enthusiasm, those who have been in the industry long enough have developed a sharpened sense of scepticism for anything that promises to drastically change the way games are played. This has led many developers to question the relevance of 3D technology on the future of the industry.

Not everyone is concerned. Publishers like Sony and Nintendo see 3D gaming as an opportunity: both have taken serious steps to embrace the technology, making their respective consoles 3D-compatible and beginning to roll out first-party and third-party 3D titles. They believe the technology has the ability to evolve the gaming experience through a never-before-seen level of immersion, bringing with it a new wave of gaming audiences. Not one to be left out of the battle for new consumers, Microsoft is working towards its own 3D gaming strategy, the results of which are yet to be seen.

Weighing up the pros and cons of 3D gaming and its potential influence on gaming in the future is something most developers seem to be doing. How can 3D gaming take off if only a small percentage of the market is able to afford a 3D-capable television? How can the industry ask gamers to sit through a 10-hour campaign wearing a pair of plastic glasses that will cause headaches and eye strain?

While these questions continue to be debated by the industry, a more fundamental worry has arisen. Does 3D technology add value to gameplay?

Sony has been leading the charge in the 3D gaming arena. The publisher's entrance into the stereoscopic 3D market began with the announcement in November last year that the technology would soon be incorporated into the PlayStation 3, paving the way for the first wave of first-party and third-party 3D titles. In May this year, Sony announced that one of its biggest first-party franchises, Guerrilla Games' Killzone 3, would be among the first games to make use of that new depth-of-field technology. Since then, the publisher has released a line of 3D-enabled televisions, a firmware update that allows all PlayStation 3 consoles to play select games in 3D, three downloadable exclusives in 3D--Wipeout HD, Super Stardust HD, and PAIN--and a full lineup of titles ready for release in the coming year, including Hustle Kings, MotorStorm: Apocalypse, Gran Turismo 5, and Mortal Kombat.

Like Sony, Nintendo has thrown its full support behind 3D gaming. In March this year, the publisher unveiled its new 3D-capable console, the 3DS, taking everyone by surprise with the announcement that glasses are not required to play it. The console turned heads at this year’s E3, earning unanimous praise for its technological and graphic capabilities, as well as its strong software lineup, which to date includes Kid Icarus, Mario Kart, Animal Crossing, StarFox 64 3D, Paper Mario, Metal Gear Solid: Snake Eater 3D--The Naked Sample, Dragon Quest, Final Fantasy, Pro Evolution Soccer, Resident Evil Revelations, Ninja Gaiden, Pac-Man & Galaga, and Dragon Ball. The unexpected success of the 3DS even prompted Nintendo president Satoru Iwata to consider a 3D-capable successor to the Wii.

At Gamescom this year, Sony executive Mick Hocking told GameSpot that he believes 3D enhances the gaming experience. Surprisingly, he sees the technology enhancing not just one or two particular game genres, but all.

"We've converted quite a lot of games to 3D from different genres, and we've found it enhances just about all of them," Hocking said. "You can imagine a game that's being designed to be 2D may not lend itself to 3D, but certainly racing games, sports games, benefit a great deal from the addition of 3D. Action games and first-person shooters look great in 3D. Pretty much everything we've tried so far looks better in 3D. I think most get enhanced gameplay from the addition of 3D."

Some developers share Hocking's view. Mortal Kombat producer Hector Sanchez has high hopes for 3D. He says his team couldn’t wait to jump on board with Sony to deliver Mortal Kombat in three dimensions.

"It's so cool, and we're really into it," he said. "We're at the tip of the spear with this, and our game is going to be one of the first to experiment with the technology. We've found that 3D allows us to do a lot more things with the engine than we've ever done before. It gives the game more depth, and makes it more eye-catching."

Spec Ops: The Line lead designer Cory Davis believes 3D affords game developers a lot of opportunities. However, he recognises that not all games will work in 3D.

"You can look around and you'll see a number of projects would be more fun and interesting in 3D. The tech is allowing us to do that. However, I'd love to see more expansion in the home television market for 3D. I'm not sure every consumer wants to wear 3D glasses when they play games, but I'm interested to see where it goes. I'll personally enjoy playing games in 3D." 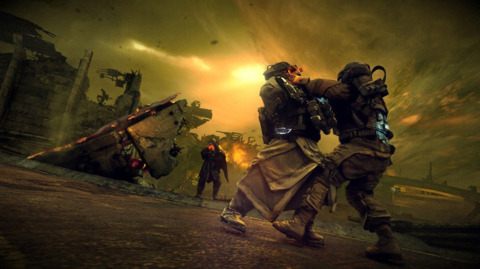 Killzone 3 will be one of the first AAA titles developed entirely in 3D.

Despite Nintendo's success down the 3D path to date, the technology is yet to convince some Japanese developers. Dead Rising 2 producer Keiji Inafune says the future of 3D gaming relies not on how well publishers make use of the technology, but on how well 3D televisions sell.

"It's hard to see what will happen or whether people will adopt 3D televisions or not, and how long it's going to take to get to that stage. The technology itself is interesting, and I think that some titles will suit 3D more than others--for example, first-person shooters. On the other hand, there will be genres that don't suit 3D at all. If this trend does continue, I expect it to happen on a more limited genre-by-genre basis, rather than across the board in the industry."

Marvel vs. Capcom 3 producer Ryota Niitsuma is prepared to wait and see how other developers adopt 3D.

"I'm curious where 3D is going to take us, but I don't know if it will become the industry standard. I just look at it as another way of presenting a game, and if it suits the game's needs then by all means go for it. There are a lot of different types of games, however, and each game requires something different."

Although it was never confirmed, there is wide speculation in the industry that Microsoft is hot on the heels of its rivals in the 3D gaming domain. While 3D games like Avatar and Batman: Arkham Asylum are available to play on the Xbox 360, the publisher has chosen to remain secretive about any plans that it has in regard to incorporating 3D technology into its console.

Some developers see this as a smart move on Microsoft's part. Without dismissing 3D gaming as a gimmick, more and more developers are looking to answer the question of whether or not the technology can add value to gameplay.

Treyarch studio head Mark Lamia says he's not yet ready to begin using the technology in the studio's titles.

"I think 3D is going to be an opportunity, but it's clearly in its infancy stage at the moment, and I see avenues for abuse if not handled carefully. I think it can be a gimmick, but I think games can use it as a way to immerse the player more in the game experience."

"No one has 3D televisions yet, so I think that once the prices come down, more people will buy them, and then we can get excited. It’s going to be the same thing that happened when the Wii first launched--some developers will figure it out; others will sit around wondering how they can best make use of it. It will definitely work with some games, but not with all." 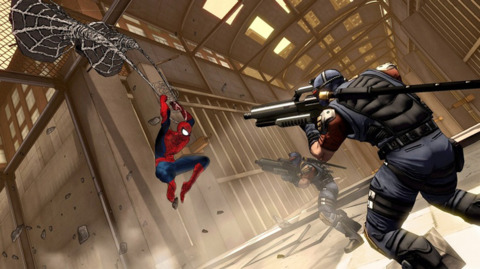 Spider-Man: Shattered Dimensions creative director Thomas Wilson believes 3D gaming makes sense only if all the console makers get on board with the technology.

DJ Hero 2 creative director Jamie Jackson believes that 3D can enhance and add value to gameplay only if used in the right way.

"Once we get over the hype, we can start to use it in a meaningful way, in a way that adds value to gameplay and it’s no longer just a peripheral. The question is how do we make it fun?"

With developers treading cautiously and publishers all too eager to embrace the technology, the future of 3D gaming remains uncertain. What is clear is that the industry cannot move forward without a clear, cohesive vision for how to best approach the technology and make the most of what it can offer gamers.

"It only makes sense if the manufacturers are actually behind this and incorporate the technology in their consoles. I would expect Microsoft, Sony, and Nintendo to look at how they can build 3D into their consoles so that it does not become a developer's problem. As it stands, I think the technology is a little early. I want to wait to see how it develops." Will 3D change the future of games? Let us know by leaving your comments below! Make sure you check back next week for The Future of Gaming: DLC.

There are 323 comments about this story
Load Comments (323)