The FNAF Movie Brings On A Very Famous Director

The Five Nights at Freddy's film is moving ahead--with a huge name behind it. Deadline reports that Chris Columbus has been brought on to write, direct, and produce the film.

Columbus is a Hollywood veteran. He directed classics like Home Alone and Mrs. Doubtfire, as well as the first two Harry Potter movies, Harry Potter and the Sorcerer's Stone and Harry Potter and the Chamber of Secrets. He picked up an Oscar nomination for his role as producer on The Help and he wrote the classic The Goonies. Columbus has some familiarity with video game movies, too, as he directed the Adam Sandler film Pixels.

The FNAF movie is being produced by Blumhouse Productions. The studio was behind smaller-budget horror films like The Purge, Get Out, and Split, as well as the Oscar-winning drama Whiplash. The Blumhouse Twitter account welcomed Columbus to the FNAF movie today with a cheeky tweet, while Blumhouse founder Jason Blum tweeted about the news: "oh yea."

As reported previously, the FNAF movie was originally set up at Warner Bros., with Gil Kenan attached to write and direct. Tyler Burton Smith, who worked at Finnish developer Remedy Entertainment as a writer on the Xbox One game and TV show Quantum Break, was at one point writing the FNAF movie. Veteran producer Roy Lee (The Departed, The Lego Movie) was initially named as a producer, but it is unclear if he remains onboard now that the movie has changed hands from Warner Bros. to Blumhouse.

According to Deadline "every genre filmmaker" wanted to land the FNAF movie rights before Blumhouse emerged victorious. FNAF creator Scott Cawthon is producing the movie alongside Columbus.

There is no word as of yet regarding a release date, cast, or plot details for the FNAF film. In the game, players must survive in a scary version of Chuck E. Cheese's that's full of animatronic monsters. It is legitimately terrifying.

A new FNAF game, Freddy Fazbear's Pizzeria Simulator, was released for free on Steam in December. However, the game is not all that it seems and may in fact be a teaser for something else.

The FNAF series debuted in August 2014 on PC and has since been ported to iOS. Sequels Five Nights at Freddy's 2, 3, and 4 followed, along with the latest entry before Pizzeria Simulator, Sister Location.

The next big video game movie is Tomb Raider, starring Oscar-winner Alicia Vikander in the title role. The film opens in March--check out the latest trailer here. 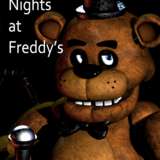