The Fellowship of the Ring Preview

We visit Universal Interactive to get the scoop on the PlayStation 2 version of The Fellowship of the Ring.

For decades now, schools, booksellers, and libraries throughout the world have been giving voracious readers access to one of the most developed fantasy worlds ever penned--Middle-earth. The Lord of The Rings is the work of J.R.R. Tolkien, who inspired nearly all fantasy storytelling since then with his epic tales of hobbits, friendship, and power. Universal Interactive will be publishing games based on all three chapters in the trilogy, The Fellowship of the Ring, The Two Towers, and The Return of the King. No doubt spurred into action by the incredible popularity of last year's movie and the upcoming sequels, Universal will try to capitalize on the current Tolkien popularity by offering games that closely adhere to the author's original vision.

Surreal Software is developing The Fellowship of the Ring for the PlayStation 2 and is making use of a modified version of its Drakan 2 engine. In order for Surreal to properly develop a world that accurately portrays Middle-earth, Universal has brought in experts in the field of Tolkien lore, who have compiled copious amounts of information detailing all of the subtleties of the world, including the many different races, specific characters, and environments and the nuances of the language used in the novels. Nitpickers and Tolkien purists should find that the story told in this translation of the tale is incredibly accurate, with deviations from the story taken with creative license to produce a better game.

Taking this storehouse of information and molding it into a highly playable game is then left in Surreal's hands, and it in turn has put together what is shaping up to be a fun action adventure game set in the rich fantasy world. You will find that The Fellowship of the Ring for the PlayStation 2 and PC will focus on aggressive gameplay with plenty of fast-paced combat, as well as many opportunities to explore.

Visually, Surreal Software's version of The Fellowship of The Ring is shaping up nicely, with detailed textures and impressive lighting effects throughout each stage of the adventure. Each character model has been rendered with plenty of detail in its clothing and general appearance, and their attack animations are quite smooth as well. Enemies, such as the troublesome orcs and other nasties, look quite polished as well, with many of them swarming onscreen at once, without a hitch in the frame rate. The environments are quite expansive, and there are plenty of areas to explore, although at all times you have the option of making a beeline toward your intended destination. The level design we examined in the preview version of The Fellowship of the Ring was reminiscent of that employed in Dungeon Siege, in which there is a clear path to follow, with multiple offshoot paths that can be explored if you so desire. These side paths aren't critical to the progression of the story, but they contain additional challenges and items to obtain, which can provide for a more fulfilling experience.

The lands and characters of Middle-earth are brought to life during exploration, but just as much can be learned during the game's approximately 40 in-game cutscenes. During these sequences, you can get to know more about your traveling companions through voice actor-performed conversations and dialogue taken directly from Tolkien's work. Here, you can truly revel in the experience of forming the Fellowship at Rivendell or accepting the counsel of Galadriel at Lothlorien. These story-driven moments often segue directly into gameplay sequences, such as the encounter with Aragorn in Bree. Once Aragorn is made privy to the fellowship's situation, he must perform a number of tasks, including the defeat of the highwaymen who are on their tail, finding Sam in town, and picking up the individual parts necessary to build the dummies that will throw the pursuers off their trail. The game is filled with smaller individual challenges such as these, and they turn elements of the story that may have been taken for granted in the film into memorable encounters.

You will take on the roles of three central characters in The Fellowship of the Ring: Aragorn, the ranger; Gandalf, the wizard; and Frodo, the ring bearer. Each of the three characters bears a contrasting play style that is defined by their unique abilities. While all three characters have a large role to play in the story, each also fulfills a smaller role, in that they embody combat, magic, or stealth, respectively.

Aragorn is well suited to melee and ranged combat with his sword and bow and has quite an array of options available to him in combat. Foremost is his ability with the sword Anduril, which he can use to perform multihit combos. When spying an approaching enemy, you can input a simple button combination to make Aragorn perform an interesting maneuver, where he tosses the sword into the air, catches the hilt, and then lunges forth, dealing out impressive damage if it connects. Aragorn can also finish off opponents if they've been knocked down but are still conscious--he'll hunch over an enemy and drive his sword into its chest, giving the sword a good twist before pulling it away. The noble ranger is also quite adept with his bow, which he can use to shoot well-aimed arrows at enemies, each bolt leaving a particle contrail in its motion-blurred wake.

Gandalf is Aragorn's magical counterpart--his abilities focus on the arcane rather than the martial. He'll be able to cast a variety of different spells, most of which are offensive nature, and will have an active role in some of the more exciting sequences from the first book in the series, such as the battle with the Balor in the mines of Moria.

Frodo, the true hero of The Fellowship of the Ring, has little to offer from a combative or magical standpoint and instead relies on his burglar heritage--his affinity for stealthy movement being his strongest asset. Frodo will have access to fairly strong attacks with his uncle Bilbo's inherited blade, but he can outlast his enemies more surely by relying on sneaky movement. Frodo also bears the artifact that is central to the storyline of The Lord of the Rings: The One Ring. When worn, the ring allows Frodo to become invisible and slip past enemies unseen. Prolonged use of The One Ring is dangerous, however, as it alerts Sauron and his ringwraiths to Frodo's location and can thus end the Fellowship's journey prematurely.

While each character has his own abilities, they each share some basic traits, such as a health bar, the ability to use power-up items, and the ability to perform a fairly sizable leap. Each of the three characters can also invoke an active defense, which in the current build stopped nearly all attacks. The blocking in the final version of the game will likely stop a fixed amount of damage, thus requiring you to decide what should be blocked and what should be dodged. Also of note is how the game has done away with many of the conventions of traditional RPGs and adventure games. The characters in The Fellowship of the Ring do not have ability scores or levels; instead, each is bestowed with fixed starting gameplay characteristics, which can be improved upon with the acquisition of new items and equipment.

The game does have some features that have been added with creative license for gameplay's sake, such as creatures that swarm forth from Gauntlet-styled monster generators and the traditional button and lever puzzles.One puzzle in particular challenges Aragorn to strike a series of targets with his arrows, which releases a mine cart that breaks through a wall in the mines of Moria. Despite this, the story as a whole remains remarkably faithful to the classic novel, with much attention paid to even the smallest details.

The Fellowship of the Ring is coming together as a surprisingly attractive action-oriented adventure game, featuring plenty to see and do, with incredible amounts of Tolkien lore at your fingertips. Although the game is by no means a replacement for reading the books, those who have only watched the movie should look forward to seeing a vision of Tolkien that lies much closer to home. Take a look at our new screens and movie footage, and keep a look out for our full review when the game is released. 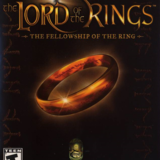 The Lord of the Rings: The Fellowship of the Ring
Follow
$16.99 on Walmart
Buy