The Elder Scrolls: Total War Mod Lets You Live Out the RPGs' History

The first version of The Elder Scrolls: Total War--an unofficial fan mod that brings the world of Bethesda's RPG series into Total War--has been released.

The v1.0 release, the first public version of the total conversion mod for Medieval II: Total War Kingdoms, is now available on Mod DB. There are 20 factions--including the Tamriel Empire, Aldmeri Dominion, Telvanni--with over 250 unique units and a campaign map based on the lands of Tamriel.

What's currently included covers the events between the year 427 in the Third Era and the year 45 in the Fourth Era. In other words, events from both Morrowind and Oblivion are included in the campaign, which will last for more than 600 turns.

The developers are insistent that this is not the completed version of the mod. The plan is to "develop the project as long as possible or interesting to you." Development began in late 2012.

You can download the 3.5 GB mod here. It requires that you own both Kingdoms and Medieval II: Total War, and you'll also need an English patch if you're not a Russian speaker. The trailer above from January shows the mod in action. You can see more in the image gallery below. 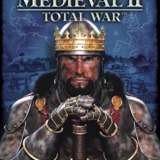