We mouthed off with Bonus Mobile Entertainment's new game, The Dozens.

The Wayans Brothers have written and starred in a variety of film and television productions since their early-1990s debut as part of the cast of the comedy variety show In Living Color. Their latest effort will be played on much smaller screens than the comedic quartet is used to, however. In a press conference, held during the second day of the CTIA mobile data and entertainment convention, the Wayans themselves announced a new mobile game, named after and based on the classic urban insult game "The Dozens." After the press event, we were able to get some hands-on time with a beta version of the verbal slugfest.

The Dozens is the digital incarnation of a game the Wayans professedly played during their youth. In that game, different players sit opposite each other, with the object of insulting each other's mother in as poignant and articulate a manner possible until one player "wins" by genuinely offending the other enough to make him or her stand up and call it quits. The quips loosely follow a format, beginning with "Yo mama," and evolving from there. Obviously fond of the pastime, Marlon joked during the press conference, "We used to play it with each other, and we all got the same mama!"

Published and (to some degree) distributed by the recently launched publishing outfit Bonus Mobile Entertainment, The Dozens will be played over GPRS networks, on all major carriers. The game will features 150 insults, each of which has been hand-chosen by the Wayans. Insults are assigned point values, based on their respective levels of quality. The idea is to one-up a quip sent by your opponent, which can be accomplished only through the use of a retort with a higher numerical value. Players improve at the game by recognizing insults, and remembering the number of points associated with them, so that it's not necessary to waste a powerful insult to counter a relatively weak one.

Each insult is contained in a virtual trading card, which is an overture to the playable card game that Topps is releasing in conjunction with the mobile game. While the WAP version of The Dozens will be text-only, the game's Java and Brew iterations will feature colorful cartoons on each card, related to the included text. 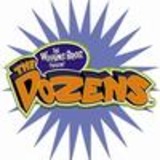