Role-playing games have come a long way, and The Dark Spire shows this generation of gamers what they might have missed.

For those who remember video games in their infancy, you may recall what it was like to have to plot out your own maps or backtrack endlessly because that was the only way to do it. We have a lot of fond--and incredibly mind-numbing--memories from those early years. There will always be an audience for classic remakes or new games based on an old formula, and some people just prefer games that don't rely heavily on the latest technology and fancy graphics. Atlus really knows how to target its niche audience and has brought over The Dark Spire, a dungeon-crawling role-playing game, which is an homage to the classics, and by classic we don't mean Super Nintendo. We're talking about back when graphics were white lines and text on a black screen.

Don't worry, The Dark Spire doesn't have to be entirely in black and white if you don't want it to be. There are two modes: one has comic-book-like visuals, and the other is a simplistic wireframe dungeon. You may want to stick with the modern mode for some visual stimulation, because the classic mode is only a small step up from the days of text-based gaming. If you still happen to enjoy the tough grind of exploring dungeons one step at a time, then take a look at The Dark Spire. It's unforgiving and cruel, but with determination and patience, you can get through. Having obsessive-compulsive tendencies may help too.

When you begin, you are introduced to Eventail, a guild master who tells you what you need to do by throwing more menus at you. There's a lot of menu navigation, so consider yourself warned. You'll start by creating your own party from scratch: name, race, and class, and you can even roll your stats until you get the ones you want. Once you've formed a party of four, it's off to the training grounds, where you'll learn the basics of combat. Once you've completed your training, you are told to head to a tower to face an evil sorcerer who has stolen the queen's necklace. Since it's obvious she's not going to get it back herself, your job is to explore this mysterious tower and bring back the royal treasure. It sounds easy enough, but if you remember early RPGs on the PC, there's a lot of running back and forth between dungeons and town to rest and get supplies. You can save in the tower at any time, but running back to town when you're low on hit points and out of spells is going to be tricky.

Movement is controlled with the D pad, or you can advance with the A button, but it's one step at a time until you hit a door whose lock you can either pick or find a key for. Random battles will occur, and assuming you aren't ambushed, you input your commands for your party and then you sit back and watch the text damage fly. There isn't much hand-holding in this game; you have to play very conservatively if you want to get ahead. It costs 200 gold to revive a party member, and when you're earning chump change for each battle, you will want to be careful. There is a map that you can view with the Y button, but a spell is needed in order to see your exact location, so make sure to include a mage in the party. The corridors will all look the same after a while, so it helps to have a good sense of direction or just pay attention each time you decide to take a corner. Enemies will often drop a treasure chest, and lucky for you they're almost always rigged and it's really hard to disarm them without getting poisoned or hurt in some form. If you do manage to get one open, you'll be rewarded with some precious gold and with a few measly items that you could potentially sell.

The graphics--on modern mode--may be on the simpler side, with menu-driven screens and static character portraits, but the music provides a bit of depth and sets the tone with its looping synthesized melodies. The style and sound are a change of pace from what's currently out there, but you have to be really devoted to explore further once the novelty has worn off.

The Dark Spire isn't designed for everyone, especially since modern-day RPGs spoil you with a healthy number of hit points from the start and money is not much of an issue. This game is hard, and it doesn't get easier unless you spend a good amount of time collecting experience points so that you can boost your level and stats. If this sounds like a dream come true, then take a look at The Dark Spire when it's released on April 14. 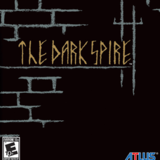