The Boston Bruins will win the 2014 Stanley Cup...according to EA Sports

Simulation shows that Bruins will defeat the san Jose Sharks in six games to take home the title.

The Boston Bruins will win the 2014 Stanley Cup, defeating the San Jose Sharks in six games to claim the title. That's according to an EA Sports simulation of this year's playoffs, the results of which were released today.

Boston's beloved professional hockey team will advance to the finals by defeating the New York Rangers in the Eastern Conference Final after a grueling seven-game series, according to the simulation. EA's simulation also says that Bruins goal-scorer Patrice Bergeron will come up clutch for the squad, scoring five minutes into OT to seal the deal.

EA's NHL playoffs simulation is conducted by using NHL 14. Results also factor in line combinations, player ratings, and variances like injuries and hot streaks as a means to provide the most authentic outcome of a game or series.

Other storylines from EA Sports' NHL playoffs simulation include the Chicago Blackhawks losing a heartbreaking Game 7 match to the Colorado Avalanche, thereby crushing their chances of repeating as Stanley Cup champions.

Developed by EA Canada, NHL 14 launched in September 2013 for Xbox 360 and PlayStation 3 and is the most recent entry in the series. EA Sports has not announced a new game in the franchise, which would presumably come to new consoles like the Xbox One and PlayStation 4. 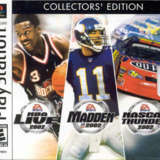