Brian Fargo's InXile Entertainment announces that it's working on a new Bard's Tale role-playing game for the PC and consoles.

Brian Fargo's InXile Entertainment has today announced that it's currently working on a new Bard's Tale role-playing game for the PC and current-generation consoles. Simply titled The Bard's Tale, the new game will be based on the original game of the same name that was produced by Brian Fargo and published by Electronic Arts on the Apple II back in 1985.

"After a nice break from the industry I'm recharged and anxious to make great games again," said Brian Fargo, CEO of InXile Entertainment. "I have collaborated with some of the top people in the industry to create InXile. We believe our success will lie in our business model, our intensive preproduction development philosophy, our commitment to creating an enriching atmosphere for creativity and teamwork, and our focus on developing a limited number of triple-A titles at a time."

Information on The Bard's Tale is scarce at present, but InXile has stated that the game will eschew genre clichés in favor of intelligent humor and will feature a storyline worthy of a major motion picture. No release date has been announced for the game at this time, but we'll bring you more information as soon as it becomes available. 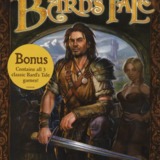