The Anacrusis is coming to contend for the increasingly contested horde shooter crown, and if you plan on diving into the sci-fi co-op game yourself, you'll need to understand its full arsenal of weapons. Below we've detailed the full range of Anacrusis guns and equipment, including its out-of-this-world array of grenades and energy-shooting firearms. Consider this your introduction to all of the weapons and grenades, and a quick explainer on how to refill ammo in The Anacrusis.

In Season 1 of the Early Access game, there are seven guns to find sprawled across the world of the luxury starcruiser, the Isolode. Three of them can be found in every safe room, while three others, the "special weapons," must be scavenged from the corridors and food courts of the shifting levels. The seventh, your standard pistol-type gun, is immovably equipped as your secondary weapon and features infinite ammo, so you'll never be totally without a fighting chance to defend yourself and your team. Here's the rundown of primary and special weapons.

The SMB (submachine blaster, we assume) is the SMG equivalent in the sci-fi world of The Anacrusis. It features a 50-round magazine, holds a maximum of 550 ammo, and boasts the fastest firing rate of any gun in the game. As you can maybe expect, it provides for a great spray-and-pray choice for players who want to mow down the aliens in front of them, but that comes at the cost of some longer-range effectiveness, such as poorer accuracy than other guns on this list.

Your standard assault rifle-type gun, the Plasma Rifle is the better choice for players who want to keep the aliens far out of arm's reach. It's the most accurate gun aboard The Anacrusis but features a clip size about half that of the SMB (24 rounds per magazine, 264 total ammo per gun). It makes for a great starter gun, and if its attributes suit your play style, you could use it round after round, too.

The Blaster, as its name might suggest, is the shotgun-style gun in The Anacrusis. It holds far less ammo than other guns (8 rounds per clip, 102 ammo overall), but that's because you'll need a lot less ammo to clear a room. The Blaster is great for players who can't be bothered with things like aiming. Just charge into a room and eject back into hyperspace whatever stands in your way. That does mean you'll need to get in closer to take on the game's mini-boss aliens, such as the Brute and Spawner.

The first of three special weapons in the game, you can't find the Arc Rifle in safe rooms, but search away from the main path and you may come across one. This Tesla coil-like gun charges up electricity, then spreads its zapping effects in a general area, moving from one alien to another and so on, so long as you're holding down the trigwhen you've already got a Plasma Rifle or an SMB.

The Laser Rifle requires a bit of patience, as there's a delay between when you pull the trigger and when it fires, but once it does, it may be the most devastating gun in the game. This rare weapon fires off a beam of pure energy and scorches whatever is in its straightaway path. It's great against special aliens such as the Grabber, because you can keep your distance and do away with any threat in a hurry.

This one likely needs no explanation, as it's a video game staple. The Auto-Turret is not a gun to wield in your hands, it's an automated machine gun that keeps the hordes at bay for as long as its energy lasts, which seems to be about a minute or two. These are excellent for crowd control when the game gives you one of its "hunker down" objectives, boxing you into a corner and asking you to stay on your feet. The Auto-Turret can't be moved once placed, so make sure it's right where you want it. After that, you'll be glad you carried it until that point.

In addition to these guns, you'll also find several different kinds of grenades as you explore. This list includes the incendiary grenade that lights an area on fire, a goo grenade that slows enemies who move across the splattered goo, a shield grenade that briefly provides a bubble shield for you and your allies to enter, and a vortex grenade that captures enemies in an energy vortex for easier targeting.

How to refill ammo in The Anacrusis

You may notice that there are no spare ammo boxes lying around the luxury starship, even though your ammo count is blatantly finite. To avoid running dry, you'll need to look for weapon recharge kiosks, which look like small metallic spherical stands, and interact with them to instantly refill your ammo to its fullest. If you do happen to run out of primary ammo entirely, you'll always have your pistol as a secondary weapon with its infinite ammo, but you should really consider this a last resort. It's much weaker than other weapons and shouldn't be relied on as your go-to alien nullifier.

For more on The Anacrusis, check out our crossplay guide so you can learn how to use Party Codes and play with friends on any platform. 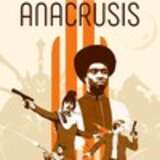