VGHM 2014
Check It Out
Feature Article

The 7th Guest: A Condemned Classic 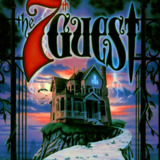 If you played PC games in the early '90s, you knew The 7th Guest--the haunting puzzle-adventure game that mixed comedy, horror, full-motion videos, and challenging puzzles, for an experience that was wholly unique in its day. The halls of Stauf's haunted mansion looked real, and you never knew when a ghost might saunter in to share in your company. The 7th Guest developer Trilobyte needed high-res, prerendered bitmaps and FMV to create the desired effect, and it took a risk by chasing its vision: due to the massive amount of storage space that was required, it could only sell The 7th Guest to PC owners with CD-ROM drives, which were uncommon at the time. If Trilobyte tried to cram all of the data from the game's two CDs onto the preferred medium of the day--the floppy disk--the game would have needed a box big enough to fit over 900 disks.

If you ask Rob Landeros, co-creator of The 7th Guest, he'll tell you that it, along with Myst in 1993, paved the way for a new breed of game and a new era for PC gaming. He's right. "The most difficult aspects were that the tools necessary to do the things we wanted to do didn't exist. Heck, the CD-ROM platform itself didn't even exist at the mass-market level. That is why The 7th Guest is often credited with kickstarting the CD revolution. So, what didn't exist, such as the ability to create a 3D environment and play back high-res animations, we had to invent. Fortunately, Graeme Devine was genius enough to create the video codec that allowed us to fit everything on two CDs and stream video directly off of them. Also, very fortunately, Autodesk 3D Studio Max arrived in our hands midway through the development process, which allowed us to build the virtual environment. We, along with Cyan, were the first to use 3D graphics for our games and develop specifically for the CD-ROM medium."

CD-ROMs enabled designers to tap into the power of high-res images and video, but it meant a lot to musicians and composers, too. Composer Tommy Tallarico (Earthworm Jim, MDK) recalls the advent of CD-ROMs, and the freedom it gave him as a sound designer: "From an audio perspective, we really wanted the sound design to be as real as possible to help draw you into the entire experience. In the early '90s, most people were still hearing bleeps and bloops for sound [effects]. But because of the CD-ROM format, we were able to create 'real' sounds and recordings, which were so important in helping to create the atmosphere and vision that the team wanted. Hearing 'real' sounds back then was pretty revolutionary at the time."

For Tallarico, The 7th Guest was a turning point for the industry, not just technologically, but also financially. "Not only was The 7th Guest the first of its kind, but it helped to drive actual hardware sales because it was the only way people could play it. The 7th Guest was the first in many categories (including the first $1 million budget for a game) and represented a lot of risk taking and foresight by both the developer and the publisher (Virgin Games)."

...what didn't exist, such as the ability to create a 3D environment and play back high-res animations, we had to invent.

The risk paid off, and The 7th Guest was successful enough to warrant a sequel, The 11th Hour. It turned the clock forward 65 years and stuck to the pattern set by its predecessor, but it failed to achieve comparable success. Perhaps it was the fact that The 11th Hour shipped late, or that the novelty of FMV had faded, but whatever the case may be, the series stalled. A disenchanted PC audience focused its attention elsewhere, and outside of a smattering of ports, the series has laid mostly dormant ever since.

But, late last year, Trilobyte reopened under new management and attempted to crowdfund the apparent conclusion to the 7th Guest trilogy on Kickstarter, titled The 7th Guest 3: The Collector. It didn't work. Trilobyte needed $425,000 to make The Collector, but only $121,318 was pledged. The team had to walk away empty-handed.

Landeros recognizes that funding the revival of a classic series by opening a Kickstarter campaign isn't a simple walk in the park, but he's still driven to make it happen. "While it has been worth the effort to reintroduce these classic games to old and new audiences in the era of mobile gaming, the team and I have an innate need to flex our creative muscles, to work collaboratively developing new ideas with the new tools at our disposal, drawing upon our considerable collective experience in game development. Besides, I always felt that there should be a third in the series that would not only be better than the preceding ones, but would allow us to tell more of the Stauf saga in a more fun and effective way."

Earlier this year, Trilobyte returned with a new pitch, this time on Crowdhoster, asking for $65,000 to create a slice of The Collector--a beta, effectively--but with just over a week to go at the time of this writing, and more than $25,000 left to raise, things aren't looking much better than before. By all accounts, the team should have had an easy time meeting its new goal when the asking amount is just over half of what was pledged previously, but it seems that the public has lost confidence in the dream; only 494 people have put their hands up on Crowdhoster, or less than 30 percent of the number of people who pledged on Kickstarter (1,713).

The 7th Guest is still a cherished series, so why is Trilobyte having such a difficult time garnering interest in a new chapter? Is now really the right time? The COO of Trilobyte, Charlie McHenry, still believes that it is. "The fans are ready; the team is largely reformed and ready; and new technologies, platforms, and tools will allow us to develop the rich environments; memorable characters; complex, detailed puzzles; and engaging plot/gameplay that serious gamers require. Pair that with developments like virtual reality, that promise to bring a whole new dimension to our well-known mansion and the horror that lurks within, and the stars are aligned. The advent of crowdfunding as a viable financial engine is also key to the equation."

McHenry may be on to something. After all, the original game rose to prominence with the help of a wave of new technology, and perhaps there's a chance for Trilobyte to do something special with its knowledge of game design and create one of the first killer applications for virtual reality. On the other hand, though new tools may be great from a development standpoint, there's no evidence that the fans are ready, at least not to the extent that McHenry believes. Though there are many cases of crowdfunding campaigns that experience a last-minute surge of support and reach their goal in the final hours, The Collector doesn't appear to be on that path. Like Stauf's creaky mansion, the future for the conclusion to the 7th Guest trilogy looks grim.

There's no singular reason why The 7th Guest can't attract the audience and support it needs to live on, but after one failed campaign and another that's seemingly on the rocks, it's clear that Trilobyte needs to take a new approach. Maybe this is a case where a beloved franchise can't rely on nostalgia to entice the masses. Perhaps it needs a publisher with money and a belief in the vision, like Virgin Interactive in the '90s. Regardless, Landeros and crew should be proud to have created an icon in The 7th Guest. It holds a special place in the hearts and minds of a lot of people, even if they aren't willing to put their money where their mouths are. It will always be remembered as a game that drove the industry forward by exploring new technologies and methods of storytelling. And, who knows; there might be a better opportunity for The Collector lurking around the corner, and we'll someday be able to reenter modern gaming's first haunted mansion.