We get jiggy in Sega's take on Paris in this new touch-based rhythm game.

What could make a game with homely aesthetics like Professor Layton better? If you said "music," you've read Sega's mind as it recently showed off a build of the upcoming adventure rhythm game.

Players control a thief-by-trade 18-year old named Ralph who lives with his dog Fondue in Paris. The game's story begins with the disappearance of Napoleon Bonaparte's coffin. After some exposition, we cut to Ralph who narrates his goal to search for artifacts that can guide him to his lost father.

After that, we somehow got caught up with Ralph and two other people in black hats and suits on a public colored dance floor outside of Paris. Here is where we experienced our first rhythm segment; we had to flick the 3DS's touch screen in either one of the four directions (up, down, left, right) or trace a circle in accordance to the beat of the song playing.

On the adventure segment, right after successfully conquering that odd dance number, we had to talk to residents to figure out where a lost artifact was hidden. After navigating through Paris to reach the Louvre, we had to solve an eight-sphere lock that could only be opened if we hit each colored orb on the door in the order it flashed.

We had to help Ralph sneak into the museum while avoiding the guards. Here is where the next rhythm game came into play: Our hero had to dash and pose in four different poses to match the statue he hid behind. Because each statue was color coded and the order it came to Ralph was timed to the song's beat, it was up to our reflexes and rhythm differentiation to keep going even after a few tries.

The game offers other sorts of rhythm gameplay, depending on the story. You'll either escape the law enforcement by timing your jumps and slides to a track or keep your cover as a butler using song and melody. As long as Sega keeps the situations bizarre and interesting, this game should be kept on the lookout by music fans who would like a little bit of Professor Layton in the mix.

The 3DS title is due for a winter release date in Japan and an early 2012 release in other countries. 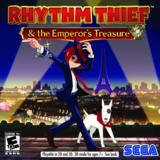