What's the sound of one arm smashing? We find out in our latest look at this bizarre Japanese hybrid.

Last time we saw the multi-armed namesake at the centre of the upcoming game Asura's Wrath, he was laying waste to giant space fingers. Today at the Tokyo Game Show, Capcom took the wraps off new content for this bizarre Japanese action title.

The demo began with a slow camera shot zooming out in space. As Earth disappeared out of view, it was clear the establishing shot was setting the scene for the location of our next battle: the craterous, ashen surface of the moon. Two similar-looking characters stood at a distance, goading each other. One was Asura, and the other, new face was Angus. Their brief conversation included scraps of information that may help explain the reason for their glaring match. Angus appeared to have at some point trained Asura as his young apprentice. While the specifics of their relationship (which we can only assume came to a less-than-amicable end) remains unclear at this stage, our guide explained that the demo takes place not long after the events of the fight shown when the game was first revealed. One thing abundantly clear was that regardless of their previous affiliation, there is no love lost between the pair now. Angus boldly exclaimed that he was about to enjoy tearing his protege apart, having trained him with the hope of an eventual showdown.

Like a scene yanked straight out of an episode of Dragon Ball Z, an initial hit sent our character flying through a rocky wall, sprawling us across the ground and into a mound of dirt. As we came to and the fight began properly, we noticed the game's slightly unusual health bar system. As you'd expect, as you take damage, your bar is depleted. However, rather than your target also having its vitality whittle away at your hand, as you deal damage it fills the bar. And as you deal damage, your fury gauge increases. Locking onto the target is done using the right bumper, and you can fire off sneaky, speedy energy shots with the X button. These proved ineffective against our stocky counterpart, and as a result, the encounter became a dance of avoiding Angus' dashing attacks and skirting around his cone of fire before going on the offensive to punch and kick in retaliation.

Angus assured us that even after tasting the sweetest things on heaven and Earth, ending us would bring him the most satisfaction. Ditching knuckles for a giant sword, he steadied his hand and began the second phase of the fight. A brief interlude zoomed through to clouds to reveal a regal-looking warrior and his lady sidekick. She commented that Angus had only ever drawn his sword twice before, asking whether or not Asura was really as powerful as the move suggested. We didn't need to wait long to find out, and as Angus began his rampage, producing bullet hell beams of energy, we were forced to jump and weave nimbly. Unfortunately, there's no dodge button to fall back on here, so we wrestled the camera to frame the action as we jumped out of the way of harmful objects and attacks. A way to evade incoming attacks would have made the experience much simpler.

Quick-time button presses and stick movements transition you between sequences, and over the course of the demo we swirled one analog stick in a circle, did single and double directional pushes, and took part in two types of timed button presses. Some of the latter reward accurate hits as the QTE target shrinks, and others just need to be pressed correctly to continue the series. Failure doesn't end your run, but bombing out does shave off some of your precious life.

No longer playing around, Angus unsheathed his katana and began slashing huge chunks out of the ground. The sword grew rapidly, and before we knew it, we were on the receiving end of a one-way trip back to Earth with a puncture hole. As we were pushed backwards and sent hurtling through the atmosphere, we began to burn up. Galactic sunburn was the least of our concerns as we slammed roughly into the planet's surface. The impact caused an explosion and left us impaled and writhing in agony, losing all but one of Asura's arms in the process. Still pinned and with a sword sticking out of our chest, we summoned all our remaining life, channeling it into winding up a huge one-armed punch, only for the scene to freeze and tell us the events will be continued.

From our latest play with this unusual brawler-turned-shooter hybrid, we're starting to fall for its fresh animated visuals, zany story, and frenetic gameplay. It has a heavy reliance on quick-time events, so we're hoping to see combat in future battles evolve into something a bit more free-form. Likewise, the introduction of a better way to evade incoming damage without the need to adjust the camera would help during skirmishes, but the stuff we've played is already a stack of fun. Look for more on Asura's Wrath soon. 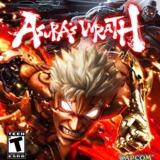