Have you ever had the urge to slap someone repeatedly? Well, now's your chance.

TOKYO--After looking through the long lineup of games at D3's booth during the 2008 Tokyo Game Show, we came across a peculiar game called Vitamin Y: Super Supplement Minigames With B6 & T6. With the increasing popularity of vitamin-infused water these days, we could only imagine what a vitamin game would entail. Unfortunately for us, the game had a lot of dialogue, but once we got past that, we were able to play through a couple of totally unrelated minigames.

Different characters would pop up and talk for long periods of time, and since all we saw were the character portrait and text, it was difficult to get a handle on what was going on. Once the characters were done jabbering, we were able to move around a map, which brought us to some minigames. The first minigame had us starting on a dock, and by pressing the A button, we were able to jump and grab a rope or vine, dangling from what we hoped was a tree. We had to swing back and forth and hit A again to jump to the next vine and so on. This was mostly about timing, and it was fairly easy to make it across.

Once we managed to get into another minigame, called Vita Speed, we were taken into what looked like a graveyard. The top screen had several heads overlapping a tombstone, and they looked like they were sleeping. What was even more bizarre was that on the bottom screen, we had an ecstasy bar on the left, and when someone's face would appear, our goal was to slap the face as quickly as we could to fill up that bar. A hand appeared as we slid the stylus back and forth, and we saw the character's face blush as we slapped. We slapped several people before the game came to an end.

Vitamin Y was certainly a game that took us by surprise. It would have been interesting to know the story, or at least find out why we were slapping random people. We don't know how the rest of the game will pan out, and at this point, we can only guess that it will get progressively stranger. The game is scheduled to be released on October 30 for slap-happy fans in Japan. 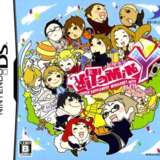