A cult RPG series comes to the DS, and we're in Tokyo to give you the details.

TOKYO--Destiny by sinner sought. Tragedy by power wrought. This phrase accompanies the title of Square Enix's upcoming DS iteration of Valkyrie Profile, a franchise that saw its first game on the PlayStation in 2000. We got to see a short trailer of this moody, Norse-themed role-playing game and managed a few minutes of hands-on time as well. We're glad to see that it's shaping up to be yet another solid RPG on its handheld host.

The trailer shows a braided girl crouched near the lifeless body of a fallen soldier. The glowing beauty then sprouts wings that seem to pulsate with light and energy. She flies into the sky, leaving a trail of softly falling feathers in her wake. She is, of course, a Valkyrie, destined to harvest the souls of the dead to fight for retribution. The camera then cuts to a battle in progress, and we are introduced to Valkyrie Profile's cast of characters. Wylfred, Lenneth, Ailyth, Milleiu, Michel, Freya, Ancel, Gwendyl, and Nataria all benefit from a quick personal debut. Then, we see them in action. In short gameplay clips, you can see that the top screen of the DS shows the battle formation, where up to four party members are assigned to the four face buttons. The bottom screen shows the battle proper.

The voice-over promised multi-system and multi-attack modes, which leads us to believe that there will be some sort of multiplayer component to Valkyrie Profile for the DS. While we weren't able to check out such a gameplay feature, we did manage to eke out some hands-on time, though we were limited to 15 minutes of play. Most of that time was spent in dialogue and story exposition.

As the game begins, the camera pans over the land, showing forests and lush mountains. Then, it eventually zooms into a castle. We see a few characters engaging in dialogue, but it isn't long before you're thrust into the first battle. Valkyrie Profile seems at first to play as a fairly standard turn-based strategy RPG. We maneuvered a character into attack range of a vicious animal and initiated combat. It soon became clear, however, that the battle system is anything but standard. Battles can include up to four different party members at one time, depending on who is in attack range when combat is initiated. Once in combat, the top screen displays each available party member and assigns each of them a face button. Each character has a limited number of attacks to perform, and pressing the associated button causes that particular character to attack.

Furthermore, you can chain attacks into special moves called over attacks. One of these attacks, soul crush, resulted in a nice display of colorful effects and offed the hovering wyvern attacking us in no time flat. Even if you haven't played a game in the franchise before, you can immediately tell that character position plays an important role in battle, and while the first taste of combat was relatively simple, it set the stage for the challenges sure to lie in wait.

Some lovely background art, such as the soft rolling clouds and snowy mountains we saw on the map overview, is sure to help draw you into Valkyrie Profile. It's too bad our time with this RPG was so limited, but we'll bring you more on this game, including a US release date (it is scheduled for release on November 1, 2008 in Japan) when it is announced. 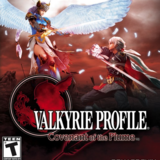