If you threw your favorite Tales characters into a giant pot and brought them to a boil, you'd get something like this sequel for the Sony PSP.

TOKYO--Tales series enthusiasts, brace yourselves: Another Radiant Mythology game is coming to the PSP, and it will be overflowing with all of the fan service that the first one provided. We talked with Tales of the World: Radiant Mythology 2 producer Hideo Baba on the Tokyo Game Show floor this weekend and asked him some questions while getting in some hands-on time with this PSP role-playing game.

The most important facet of the original Tales of the World was its cast. It was the video game equivalent of fan fiction, tossing a crowd of well-known characters along with a few original creations into a stew of random quests and a standard Tales combat system. Baba told us that the sequel's structure will remain essentially the same. If his statement applies to the mission structure, it means that you will take various unrelated quests from a local guild, and be able to recruit up to three other characters into your party at any given time. Baba did confirm that the friendship system from the first game will remain mostly the same, so to recruit people, you will want to remain on his their good side. We were more curious about the full cast, but Baba didn't wish to share details, and told us that this information hadn't yet been passed on to the Japanese press either. We also asked if Tales of Vesperia, the most recent game in the series, would be represented, but Baba would only confirm that Tales of the World 2 would include more than double the number of characters as the first.

However, it's unclear why Baba was so tight-lipped regarding the character list. By accident, we were flipping through some Tokyo Game Show promotional material, and a two-page ad for the game showed a complete list of playable and non-playable characters that will inhabit the Tales of the World: Radiant Mythology 2 story. They include Zelos and Presea from Tales of Symphonia, Bruiser and Rutee from Tales of Destiny, Chat and Reid from Tales of Eternia, and Suzu and Arche from Tales of Phantasia. Other characters are ripped from Tales of Destiny 2, Tales of Rebirth, Tales of Legendia, and other games that, as you can guess, all have titles that begin with the same two words. It's a huge and familiar cast, numbering more than three dozen, so if you're a franchise fan, you'll be quite pleased with the selection. However, the biggest news in the ad is that Yuri will represent Tales of Vesperia, and due to the way that the page is laid out, it seems that he will be a playable character. This is good news indeed for those who enjoyed the most recent entry.

As for the story itself, no surprises sprung from the pages of the ad, and Baba didn't have much to say on the subject. He did tell us that the story will be completely different from the first game and will take place in a totally different world. Like in the original, you will create a character from scratch and choose a profession, though we don't yet know what the job choices will be. You can also choose from other options, such as clothing and voice-over styles. From there, your goal is to find out exactly who you are, which leaves things rather vague. But for now, that's all we know.

As for gameplay, combat should be familiar to anyone who has ever played a Tales game. You take control of a single party member, and battles take place in real time within the combat arena. Pressing the attack button will automatically target an enemy, at which point your character will run toward it and perform the move. You can also perform spells known as artes, and though you can have only a limited number of them mapped to the PSP's buttons at a particular time, you have a good variety from which to choose, so you have a certain amount of flexibility in customizing party members to your own style. The three characters you don't control will attack, heal, and use items as the artificial intelligence sees fit, or you can customize their behavior in various ways.

The one play mechanic that we were curious about was a third gauge at the bottom of the screen. We wondered aloud to Baba about what that meter indicated, but like with other facets of the game, he didn't want to get into specifics and indicated only that it related to additional party skills. Nevertheless, we assume that it's the overlimit gauge of the first game, and screenshots confirm this assumption. Perhaps it's just as well that Baba has been so cryptic; RPGs are at their best when we let them surprise us as we play. Regardless, the one thing that we will spring on RPG fans is the release date--when one is announced, that is. Keep your eyes on this space for future updates! 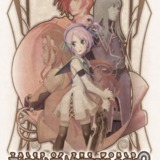