The Tales series returns to its roots in this DS iteration.

TOKYO--Tales of Hearts producer Hideo Baba wants Tales fans to send strong wishes his way. Why? Because the DS entry in this famed role-playing series has not yet been confirmed for a US release. Well, Hideo, we're in your court. After playing a bit of the game and finding out more details, we're certainly sending a few good thoughts of our own. Tales of Hearts looks to be another solidly straightforward entry for the franchise, and we thought we'd share a few details on what to expect should the game make it stateside.

Combat seems initially familiar: One button lands standard attacks, while another performs artes, the game's equivalent of magic spells. However, there are a few variations over the last few Tales games. First off, battle movement doesn't offer the freedom that previous games have included. But just because you're limited to a 2D plane of movement doesn't mean that combat lacks strategy. Baba indicated through a translator that height will be a major factor of many battles, so you'll need to be conscious of both the horizontal and vertical planes. He compared it to the combat in Tales of Destiny and Tales of Phantasia.

Another neat addition is that of support attacks. Your own character will be joined by only two others in battle, and the skirmish appears on the top screen of the DS. However, four other support characters appear on the touch screen (Baba was mum about whether four was the top limit, but his hints would indicate that the maximum number could surpass four). During battle, a support gauge rises, and as it does so, each of the four portraits become available to touch. Touching a portrait will cause that support character to rush in, perform a move, and then rush away from the battlefield. According to Baba, these moves could include standard attacks, artes, or even offerings of potions. Additionally, if the attack of your support character matches your own attack in some way, they might complement each other, unleashing an ultimate attack that causes extra damage. How these attacks may relate to each other or how such a move is performed is unclear though, and Baba wants players to discover this secret on their own.

As we explored the cliffsides of the demo version of the game, we encountered a number of different enemies: sharp-beaked hawks, clawed lizards, and a miniature T-Rex that had an amusingly dramatic chomp animation--its toothy mouth opening wide enough to swallow an entire human head. During combat with these clever foes, we did note the existence of an additional gauge, which Baba called the emotions gauge. While the translation we got was a bit awkward, it seems that the gauge fills as you block and depletes as you attack. A full gauge allows you to string more attacks together for additional damage.

We didn't see any of the franchise's famous story skits as we played, but Baba promised us that they'd be present in both story sequences, as well as gameplay sequences. As for the story itself, Namco Bandai hasn't released details of the characters or their plights, and Baba was tight-lipped on what we should expect. He did confirm, however, that the use of the touch screen was limited to initiating support attacks. In any case, here's hoping that Tales of Hearts manages a North American release because it seems to contain all the elements Tales fans have come to expect. In Japan, it's also being released in two versions: one featuring CG cutscenes and one featuring anime scenes. We'll bring you more information as soon as we receive it. 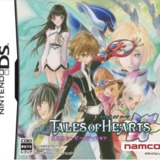