A week before No More Heroes went on sale in North America earlier this year, Grasshopper Manufacture CEO Goichi Suda told GameSpot he was already eager to jump into a sequel. It appears as if the self-styled punk game developer is going to get his wish, as a teaser trailer for No More Heroes: Desperate Struggle has been spotted on a number of sites on this, the first day of the 2008 Tokyo Game Show.

The trailer shows the original game's protagonist Travis Touchdown sporting a partially obscured T-shirt that appears to read "Travis strikes again." In the brief clip, Travis flashes out his beam katana, yells "I'll be back," and jumps into battle with an outlandishly armed female adversary. The trailer ends with the shorthand "NMH 2" giving way to a logo for No More Heroes: Desperate Struggle.

If a series of flags shown at the outset of the trailer is anything to go by, Grasshopper will again be developing the game while Marvelous Entertainment will handle publishing duties, at least in Japan. Rising Star Games and Ubisoft published the original game in Europe and North America, respectively.

The teaser trailer gave no indication as to the platform(s) on which Desperate Struggle will be released. Regardless, the game won't be able to command Suda's undivided attention. The auteur (often known by his nickname, SUDA-51), is also working on a collaborative project with Resident Evil creator Shinji Mikami for Electronic Arts. That project is being developed using Epic Games' Unreal Engine 3, and is set for release on the Xbox 360, PlayStation 3, and Nintendo Wii.

[UPDATE]: During Marvelous Entertainment's TGS International Press Event today, the company offered a few more details about Desperate Struggle. The game is only being developed for the Wii, is set for release next year, and is being made by the original No More Heroes creative team. International publishing has also already been arranged, as Rising Star will again handle the European release, while Marvelous will copublish the title in North America through a deal with Xseed Games. 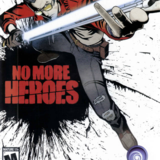