We fire lasers at gigantic bodybuilders wearing only Speedos in this preview. Yes, Chou Aniki is back.

TOKYO--Tucked away on one side of Sega's massive booth at TGS is Chou Aniki, a PSP game that looks like a typical 2D side-scrolling space shooter until you go in close and see what's actually on the screen. In short, the entire game seems to have one recurring motif: male bodybuilders dressed only in Speedos.

Chou Aniki first popped up on PCs in the early '90s, and we're guessing this PSP version is a remake of the very first game (we couldn't track down anyone with English-language skills to clarify). The "ship" you control in this unique game from developer GungHo Works is a flying muscleman, who at all times has his brother flying in close formation with him. Firing is done by pressing the X button (with lasers coming out of the top of the brother's head), and the brother fires at the same rate for some extra grunt. More usefully, the brother can absorb weaker enemy fire, meaning that he can be used as a shield if positioned correctly. Like in most typical space shooters, the action on the screen moves from left to right, although the main character can also turn and fire to the left by pressing the PSP's left shoulder button.

Your enemies at first look like typical nasty alienlike vehicles, until you see that the pilots who jettison from their ships once you destroy them are even more barely clad musclemen. You'll see more of these guys as you progress though the game. For example, one end boss we saw was a gigantic man with a naked torso lounging inside what looked like a scooped-out half globe. Another level boss we spied consisted of two giant bodybuilders who fired waves of projectiles at us by kicking their legs. And the testosterone doesn't stop there--in the top right-hand corner of the play screen, next to where your score is tallied, is a miniature muscleman doing sit-ups as your score increases.

Chou Aniki harks back to the simple space shooters of the past, and we're curious to see just where the bodybuilder theme will be taken in later stages of the game. Keep it locked to GameSpot for more TGS news and previews. 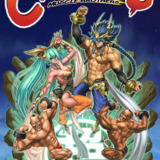