We test-drive Sega's upcoming racer for the PlayStation 2.

One of the few games that we had to stand in line for at the Tokyo Game Show for any significant amount of time was Sega Rally 2006 for the PlayStation 2. We stood in line for at least 10 times as long as we actually got to play the game, but a nearby trailer detailed some of its key features, which we got to watch several times (in addition to engaging in a brief conversation with the game's producer), thus ensuring that our time in line certainly wasn't wasted.

Sega Rally 2006 will feature time attack, career, and arcade modes of play, which doesn't sound like a lot until you find out just how deep the career mode is going to be this time around. You'll start your career as a novice driver behind the wheel of a standard production car, and then, as you progress, you'll be able to improve its performance by spending money on upgrades. You'll eventually be invited to meet with sponsors, who, in exchange for you allowing them to cover your car in logos and such, will give you more money to spend. Ultimately, if you're good enough, you'll be invited to drive for a works team.

The competition we were able to race in during the few minutes we had to play the game comprised four races on tracks in Europe, Africa, and Scandinavia. We started the first race at the back of a 15-car field, and we started each subsequent race from whichever position we finished the previous one in. The other cars were noticeably slower than ours, of course, and they didn't put up any kind of fight as we attempted to overtake them. But that's not really what Sega Rally has ever been about.

The Sega Rally games are fast and accessible, period. So it came as little surprise that we were able to drive over grass verges and collide with fences without really feeling like we were being punished for doing so. The word accessible isn't to be confused with easy, though, and there was more than one occasion where we reached a checkpoint with less than a second to spare on the timer.

The tracks we raced on were all set during the daytime and in dry weather, but we did get to see some video of a nighttime race, and we were told by the game's producer that all 200 (that's right, 200) of the tracks in the game will not only support different times of day, but also numerous weather conditions, including heavy rain and snow.

Playing Sega Rally 2006 with a GT Force wheel, we found that the handling was very responsive, and the implementation of the force feedback was superb--especially when we landed after a jump or hit the gas pedal. The sense of speed was also quite impressive, regardless of which camera view we chose to play with.

Sega Rally 2006 hasn't been confirmed for release in North America or Europe at this time, but it will be arriving in Japanese stores in January. We'll bring you more information on the game as soon as it becomes available. 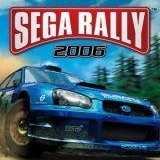