We try out Atlus' PSP conversion of an old gem for the Sega Saturn.

TOKYO--Anyone who owned a Sega Saturn and who actively sought to find games to play in the system's twilight years likely knows about Princess Crown. The original game from Atlus was released toward the end of the Saturn's life cycle. Due to the sorry state of support for the system, the game never saw a US release, but Saturn devotees were deep into importing by the time it hit. Players who made the effort got a pleasant surprise, as Princess Crown was a gem of a game. It blended side-scrolling action and role-playing elements, which resulted in an engrossing hybrid game that possessed a winning charm. Fortunately, for anyone who missed it, Atlus has dusted off the game and converted it for the Sony's PSP. A work-in-progress version of the game was on display in Atlus' booth at the Tokyo Game Show, and we eagerly nabbed it to see if the title still held up after all these years.

Princess Crown puts you in the role of Princess Gradriel, a young monarch who, as is always the case in an role-playing game, winds up getting sucked into a quest to save her kingdom from evil. The game features a unique side-scrolling game mechanic that has more in common with a standard hack-and-slash game than an RPG. However, the RPG elements have been folded in surprisingly well. You'll have an inventory and will basically travel by walking from left to right on the screen. Every so often you'll hit junction points that let you branch off the main path by pressing up. The nice bit is that this system is also applied when you're exploring towns or building interiors. As far as combat goes, the game shifts to a one-on-one fighting-game-style presentation when you encounter an enemy (with a helpful fairy popping down and tossing you your sword). Though you have only one attack button, the battle system makes the most out of it by letting you perform different combos by hitting the button repeatedly and holding up or down on the D pad. In addition, holding down the button will let you perform a powerful charge attack. You'll want to use the attack sparingly, though, since it leaves you vulnerable for a few seconds after you perform it while Gradriel gains back her strength. The final RPG bits in the game are an inventory system, a map of your surroundings you can refer to, and an experience system that lets you level up.

While this all sounds good and compelling, Princess Crown also features a cool extra that beefs up its replay value considerably. The game's action is ostensibly a story being read to a young girl by her grandmother. At the start of the game you'll take control of the girl as she picks up a book on the floor and takes it over to her grandmother, who's sitting by the fireplace. This kicks off Gradriel's adventure. As you progress through the adventure you'll begin to see more books you can pick up, which let you play as several different characters in the game, all of which feature unique quests.

The visuals in the game still impress, with massive, detailed sprites and fluid animation for the characters. The environments are also notable for the same reason, and you'll find a host of little touches peppered throughout the world. The special effects in the game also add some welcome flash to the proceedings.

The audio is a modest part of the package, but it still features some solid elements. The game's soundtrack features some nice orchestrated bits. The sound effects, most notably Gradriel's sword, stand out. Finally, you'll hear a modest number of voice clips peppered throughout the game during battle to help underscore the action.

Based on what we played, Princess Crown manages to hold up nicely. The gameplay is rock solid, and the visuals have a nice retro look to them that still impresses. Best of all, the surprisingly lengthy quest and assorted playable characters add a considerable amount of replay value to the game, which isn't something you see a lot of on the PSP. The pseudo-letterbox presentation is a bit of a downer, but it's hard to complain since we're just pleased to be able to play the game on the go. Princess Crown is slated to ship this fall for the PSP. Although there is no word of a US release for the game, we're hoping it finds its way over somehow. 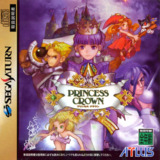