We check out the PC and PS2 versions of Sega's upcoming online role-playing game.

Sega's trailer for Phantasy Star Universe showed a number of online players in a hub city environment communicating with each other via speech bubbles and using dance emotes, but the version of the game being played at the booth was single-player. When playing solo, you'll be able to group with CPU-controlled characters who--based on what we saw of the game--looked to be quite intelligent and more than capable of looking after themselves in a fight.

The fights that we saw being played out pitted the players against waves of monsters and dragons in both interior and exterior locales, and invariably ended with a boss fight against a much larger enemy. The environments and characters were all very easy on the eyes and employed the same colorful art style as Phantasy Star Online. The weapons being used by the players--which included rifles, swords, and polearms--looked especially good, and they all featured brightly colored glowing components.

We'll bring you more information on Phantasy Star Universe just as soon as we manage to get hands-on with a version of the game. 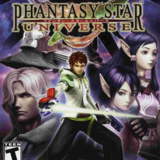