TOKYO--Last week, Sega thrilled millions of Sonic fans by announcing it was developing a game starring the blue hedgehog for both the PlayStation 3 and Xbox 360. During an event at Sega's Tokyo Game Show booth today, Sonic Team head honcho Yuji Naka came up on stage to talk about the next-generation Sonic. He also performed a real-time gameplay demo (viewable below), which proved that the eagerly awaited game will have high-definition graphics akin to those shown in its trailer.

First, Naka confirmed that the new game's title will be Sonic the Hedgehog, to mark the 15th anniversary of the original game. He also revealed that its theme will be "What if Sonic actually existed in real life?" Indeed, the Sonic onscreen during the demo--which featured a level from the upcoming game--looked pretty realistic. His spikes moved up and down as he breathed, giving him a more natural appearance than in his past outings. Of course, Sonic still moves supernaturally fast, and the game keeps other series hallmarks such as rings and boosting springs.

To power the new Sonic, developers at Sonic Team are using the Havok physics engine, which was also used to help develop Halo 2 and Half-Life 2. Naka praised Havok's flexibility and showed how a 20-kilogram box would move differently from a 50-kilogram box when pushed by the game's hero. He also had Sonic knock a series of hovering, jet-pack-riding enemies into a bridge covered in boxes. The bridge then collapsed, sending the boxes tumbling to the ground in a satisfyingly chaotic fashion.

Later on in the demo, Sonic landed on a rope that extended from one platform to another--and it flexed a bit due to his weight. When the blue hedgehog charged into a group of enemies, smashing them into a wall, the wall crumbled, scattering bricks realistically in different directions. Naka added that each brick weighed two kilograms and would fly further than heavier objects in the game.

Naka also showed the level of detail his staff is trying to give the new Sonic the Hedgehog. Although it's trivial to the gameplay, Naka showed that even a simple tree has mushrooms growing on it, giving more realism to the overall atmosphere of the game. With current-generation consoles, generating the amount of polygons needed to create those mushrooms would have been near impossible.

While the demo featured a level being developed for the game, Naka cautioned that there might be changes in the final version. However, he did show one feature that will probably be kept intact in the completed version--the passage of time. Using a debug mode, Naka fast-forwarded time in the game to show how the stage changes depending on different hours of the day. Here, the powers of the next-generation machines were once again on full display. The sun realistically moved from sunrise to sunset, changing the direction of all the visible shadows, and clouds moved through the sky.

Naka wrapped up his demo by hinting that we'll be seeing even more interesting games in the future. "The games we showed today are only a fraction of what is currently in development [at Sega]. There are titles that will definitely surprise everyone," he concluded.

The Sonic the Hedgehog demo definitely impressed the audience with a glimpse of how next-generation consoles will change games. However, Naka curiously did not mention whether the dev kit he was running the demo on was for the PS3 or the Xbox 360. Keen-eyed observers in the audience caught a telltale clue, though--the Sonic Team staffer performing the demo was holding a PlayStation 2 Dual Shock 2 controller. 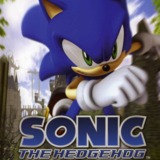