Dust off those guitar and drum controllers.

TOKYO-It's being shown on only one tiny TV near the rest of Konami's Bemani lineup at the Tokyo Game Show 2005, but that doesn't mean it isn't happening. Konami is showing off a very brief trailer for a new PlayStation 2 entry in the Guitar Freaks & DrumMania series.

It's not entirely clear if these will be two separate products or just one, but given the past history of the series, which has combined the two rhythm games into one package, it seems likely that this will be one product. Guitar Freaks allows two players to play plastic guitars much like Beatmania players play keyboards and Dance Dance Revolution players hop around on floor mats. The game tells you which colored buttons you need to hold down and when, and it's up to you to match the rhythm of the game as closely as possible. DrumMania works the same way, but on a more difficult scale, as the drum controller incorporates a foot pedal and several drum sensors.

The Guitar Freaks and DrumMania games link together in arcades allowing two guitarists and one drummer to all play the same song at the same time. That link mode ability has carried over to the PlayStation 2 releases. It's been some time since Guitar Freaks and DrumMania came to the PlayStation 2. There have been only a handful of releases of these games on home systems, while there are well over 10 of each in arcades.

Guitar Freaks V & DrumMania V is scheduled for release on the PlayStation 2 in 2006. No North American release has been planned, and given that Konami hasn't released any of the previous games in the US, it seems destined to stay that way. 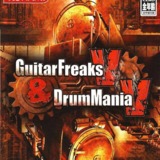