Discover the forged paintings in this PSP detective game from Bandai.

TOKYO--The PSP seems to finally be getting a piece of the Japanese adventure game action with Gallery Fake. It's a game that on the surface looks to have a lot in common with games like Phoenix Wright and Trauma Center, though this one has its own unique focus. We snuck through the crowds around the Dragon Ball Z games in Bandai's booth to get our hands on Gallery Fake to see what makes it tick.

The game is an adventure that puts you in the shoes of a detective who's investigating crimes; specifically, he's investigating a case of an apparently purloined piece of artwork that's been replaced with a fake. From what we could tell, working the case started out with a perusal of newspaper stories about the gallery itself. In the process of reading the newspaper, specific facts would stick out among the stories on the page. These tidbits of information would be labeled with a key icon, and then several of those keys were lined up on the right-hand side of the screen.

Insofar as we could tell, specific conversations in the game would start to repeat as people tried to discuss the crime, giving you an opportunity to break in to the dialogue and use one of your key facts to amaze everyone around you and show your true detective skills. These maneuvers weren't always successful, though, and each time you use a "break" skill, an onscreen meter along the top of the dialogue box is drained a unit at a time. So apparently you can't just go around making declarations willy-nilly; revealing what you know at the right time is the key to proceeding.

Gallery Fake is a game we'd love to learn more about, though getting a translation from Japanese would help a bit in this respect. The game will be released for the PSP in Japan on September 29, and there's no word yet on an English version. However, hopefully the PSP will go the way of the DS in its treatment of adventure games (like Phoenix Wright and Trauma Center), and we'll get to see this one on our side of the ocean. If that happens, we'll bring the news right here to this very gamespace. 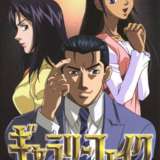