The quest was for slimes instead of dragons during our recent bout at the Tokyo Game Show 2005.

TOKYO--Tucked away in the Square-Enix booth at the Tokyo Game Show 2005 were a few games that weren't being showcased at Square's display in the giant DoKoMo NTT area. The first instantly noticeable thing in Square Enix's section was the woman holding a basket full of slime keychains with people swarming around her, which could have meant only one thing, that she was safeguarding the game that made the slime famous, Dragon Quest. In this particular case, the version was Dragon Quest II for mobile, a port of the classic NES game. If you're still scratching your head and wondering why you missed out on a Square game called Dragon Quest for the NES, it's because it was released in the States as Dragon Warrior.

The mobile port of Dragon Quest--as it's currently titled for the Japanese release, but which would presumably be renamed if it were brought to North America--is extremely well done. The graphics are as good as, if not better than, NES quality, and the controls work quite smoothly. We got into a few battles with monsters just to revisit our nostalgia of the old game, and we can verify that it's just as good as its inspiration. Unfortunately we didn't bump into any slimes in our travels, but we got our fair share of the typical early-level monsters. Everything is the same as we remembered it, making this game an excellent port of an excellent game. It's not yet scheduled for release in North America, except we suspect there's hope, especially given that the game is a port and has already been localized. We look forward to hearing more about this game as updates present themselves. 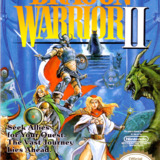