The online outbreak has penetrated the Tokyo Game Show, and so far Capcom's four-player zombie hunting game looks like it could be pretty great.

It had been rumored for quite some time that Capcom was actively working on an online Resident Evil game. Over time, the rumors solidified and became the company's new zombie destroying project, Resident Evil Outbreak. Aside from playing through multiple scenarios with up to four players over the Internet, the game will also contain a single-player mode that puts two AI-controlled characters at your side.

The game contains eight playable characters, and as previously reported, each has his or her own strengths. We took Kevin for a spin right away, because as the character description screen stated, he started with a high-powered pistol. But each character has other differences than the ones listed on the select screen. For example, holding down R1 and pressing X with Kevin executes a helpful kick that is great for keeping zombies at bay. Each character is different, making them all fairly important in the context of a four-player online game.

One of the many interesting features about Resident Evil Outbreak is the virus gauge. This percentage measurement appears in the lower-right corner and keeps you informed about how much of your body has been infected by the virus that is turning innocent bystanders into zombies. Here's where it gets crazy: when your meter reaches 100 percent, you don't die. Death only occurs when your life meter expires. Becoming fully infected turns you into a zombie and you can stalk and attack the other players. Your character takes on a pronounced lope after the change, and your attack options are limited to an arms-forward attack that swipes and swings at nearby humans. Of course, as a zombie, you're just as susceptible to taking a shotgun blast to the head as the next zombie, so there's definitely a disadvantage to making the switch.

You'll be able to communicate with the other players, but not as directly as you'd think. Instead, the right analog stick and one of the face buttons are used to get your character to talk. This function is context-sensitive, so if you're getting eaten by zombies, you can hit a button to call for help, and so on.

Graphically, RE Outbreak has a pretty impressive look to it. The character models and the textures that sit on those models both look great, and the environments do a wonderful job of both setting the tone and conveying a sense of realism.

Though the middle of a trade show is hardly the place to judge a game's network conditions, it's worth noting that Capcom was running several four-player sessions over a LAN connection, and there didn't seem to be any lag whatsoever. It remains to be seen how well the game will perform over actual consumer-grade Internet connections, but it doesn't seem like an especially bandwidth-intensive game, so lag doesn't seem like it will be a problem.

Resident Evil Outbreak will be released this winter in Japan, complete with support for Sony's PS2 hard drive. A US release will follow sometime in 2004. The game is also scheduled to come out in Europe at some point, though Capcom has been unable to confirm if the European versions of the game will contain the game's online component. 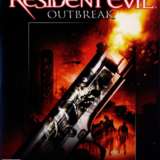