We check out how Capcom's upcoming GameCube toy-based brawler is coming together.

We tried out a new version of Gotcha Force, Capcom's upcoming brawler for the GameCube that lets you use a variety of toy mechs, called Gotcha Borgs, to duke it out in arenas. The version on display on the TGS show floor was a bit further along in the development cycle from the last time we saw the game. The game featured improved graphics and a more-stable frame rate, which bode well for the final game.

The demo on display featured a modest selection of options--a small portion of what the final game will offer. The only mode available was a multiplayer battle that pitted you against three other opponents, human or computer-controlled, in arena combat. The demo offered a handful of Gotcha Borg teams to select for battle that ranged in size, strength, and speed. Each team is made up of a trio of borgs, although you'll control only one of these robots at a time. The rest of your team will fight on their own. However, if the borg you're actively controlling is taken out, you'll be given control of another member of the team.

The combat in the game takes a very arcade-like approach, and has simple controls and auto targeting to keep the hectic battles manageable. Each mech has unique attacks, and as you might expect, smaller borgs are speedy but pack less of a punch than the large bruisers. As a result, you have to use a bit of thought when wading into combat. Once you get a handle on your mech's strengths and your enemy's weaknesses, the action can get considerably heated.

The graphics in the game sport a clean, cartoon-like look that seems inspired equally by both anime-style robots and children's toys. The game's color palette is extremely bright and leans heavily on primary colors. The mech designs are actually pretty cool and include many designs that recall classic Japanese cartoon robots. Each of the borgs has a number of unique attacks that all have a unique and suitably flashy look. You'll see everything from enormous throwing knives, missiles, and telescoping fists flying everywhere during a brawl. While the earlier versions of the game we've seen have struggled a bit in terms of frame rate, the TGS demo was running much more smoothly, even in four player split-screen games with human opponents.

Based on what we've seen so far Gotcha Force is making some good strides in its development cycle. The game seems pretty enjoyable even in its unfinished state and sports some cool mech designs. Gotcha Force is currently to ship this year for the GameCube in the US and Japan. 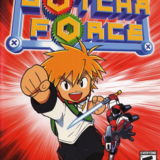