Hudson is remaking Bonk's Adventure as part of its Sega Ages-like re-release line.

For an American, the Tokyo Game Show is a strange animal. Unlike at E3, where every game is potentially relevant, there are a lot of really obscure games at TGS that are just too weird, too niche, or simply too Japanese to ever make it over to the US. Hudson Selection Volume 3: Bonk's Adventure definitely skirts the latter category. The game is, in fact, a remake of the old (old) PC Engine/TurboGrafx 16 game Bonk's Adventure, which many of our younger readers may not be familiar with. Though it may never see the light of day on American shores, we'll have our phones at the ready when the game comes out in Japan.

Back in the day, Bonk was a caveman with a giant, bald noggin that he used as a weapon. The game was a pretty straightforward platformer that had you running, jumping, and headbutting your way through a series of prehistoric levels. There were some interesting mechanics at work--you could flip while in the air and land head-first on enemies, and if you kept spinning, you could sort of hover slowly down to the ground. You could also eat meat to turn Bonk first into a monkey and then into a raging caveman berserker; both of these forms gave him some new powers. The Hudson Selection version of the game retains all of these elements and appears, from what we saw, to be a pretty accurate remake of the game. Of course, the graphics have been updated, and though the game still takes place in two dimensions, Bonk and his enemies and some key game world objects are all in full 3D. The original game featured exaggerated and highly expressive character animations, and the remake has taken these to a new extreme--Bonk contorts wildly, his eyes bug out, and he generally goes kind of crazy in various situations. The game's backgrounds are 2D and look a little reminiscent of the children's storybook style of art seen in the Super NES game Yoshi's Island.

The GameCube version of the game was on display at the show, but the game is also planned for release on the PlayStation 2.

Forgive us if our coverage of this game makes you anticipate Bonk's Adventure for a stateside release--for that seems a little unlikely. But vigilant importers who remember the good old days can rest assured that they'll be able to get their hands on the game when it's released later this year. We'll bring you more on Hudson Selection Volume 3: Bonk's Adventure as it approaches its Japanese release date. 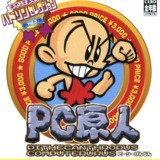