Hudson is releasing a remake of its old 2D platform game, Adventure Island.

Much like Sega's recent Sega Ages line, which takes that company's old classics, gives them a slightly fresher coat of paint, and re-releases them for current consoles at a budget price, Hudson has what it's calling the Hudson Selection series. Along with games like Bonk's Adventure, Star Soldier, and Cubic Lode Runner, Hudson is also planning to release a fourth volume in the series, a remake of the mid-80s platform game, Adventure Island.

Like the other games in the line, Adventure Island has been redone in 3D, though the game doesn't really go out of its way to look terribly modern. The graphical enhancements are mostly made to the characters themselves, making Master Higgins look more expressive and the enemy characters a little more animated.

The object of Adventure Island is quite simple. It's your job to run to the right, collecting fruit and other food to stay alive while you toss your caveman axe at snakes, giant snails, and other enemies. The game's most famous power-up is a skateboard, which lets you move a lot faster, but you also lose the ability to stop moving or move to the left. Higgins is out to save his girlfriend from an evil witch doctor, and you'll have to make your way through several stages and areas, fighting the witch doctor's different forms along the way. Overall the game feels like a nicely accurate remake of the original NES and TurboGrafx-16 game.

The game was only shown on running on the GameCube, but Adventure Island will also be appearing on the PlayStation 2. Both versions are scheduled to be released in Japan this December. No plans to release this, or any of the other Hudson Selection games in the US have been announced at this time.

For more of GameSpot's coverage from the 2003 Tokyo Game Show, click here. 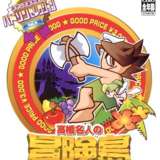