Capcom brings its survival-horror-themed light-gun game back to the Resident Evil side of things.

Capcom has announced plans to develop Biohazard: Gun Survivor 4 for the PlayStation 2. This latest game in the series follows games like Dino Stalker and the quite terrible Resident Evil: Survivor and will attempt to combine survival horror with light-gun shooting.

The game is scheduled to release in Japan next year. No plans for a US release have been announced at this time. 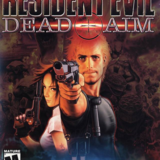