Another golf game hits the Wii, this time from Capcom, and we take a swing with it at its first public showing.

Golf seems to be a natural fit for the Nintendo Wii, which has several games that already use the console's motion-sensitive controllers to emulate the sport. However, Capcom's We Love Golf! offers up some new variations on the mix, as our hands-on time at Capcom's TGS booth has shown.

We Love Golf! features a stylised, cartoon-like environment, similar to other cutesy titles in the genre such as Hot Shots Golf--think anime-like character models with big, round eyes and you'll get the drift. This similarity isn't coincidental, given that the game's developer is Camelot Software Planning, the Japanese dev house that created the first Hot Shots game for the PlayStation in 1997. The game controls as you would expect from a Wii golf title. Players will need to hold the Wii Remote pointing downward like a club and swing it through the air to strike a ball. Furthermore, We Love Golf! adds a new visual power indicator that shows you exactly how much backswing and power you'll need to get a great shot.

To swing at the ball, players will need to hold down the remote's A button (holding down B will perform a practice swing). Holding down A will make a curved indicator line appear onscreen, which represents your swing. At both ends of the indicator line are two symbols shaped like the heads of golf clubs. The one on the backswing represents the maximum power you'll need for the shot, while the one on the downswing requires you to let go of the A button to ensure a perfect strike of the ball. Essentially, a good swing in We Love Golf! goes like this: You swing back with the Wii Remote until the indicator reaches the ideal power, then swing forward and let go of the A button when the indicator passes the second golf-head symbol.

It's a little more complex than the swing mechanic used in Wii Sports' golf game, and will take some time to get used to for gamers more accustomed to that particular Wii simulation. In our hands-on time with the two holes being demoed at TGS, we found it a little difficult to accurately stop our swing, and it also proved problematic to let go of the A button at the precise point during our downswing. However, that didn't stop us from getting pars, although it did prevent our strikes from reaching their maximum yardage. We Love Golf! is slated for a 2008 release, so we're hoping the swing mechanics get tightened up somewhat between now and then. Stay tuned to GameSpot for more on We Love Golf! in the near future. 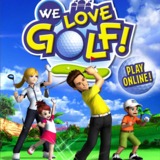