We take to the skies with this upcoming arcade shooter for the Nintendo Wii.

Shikigami no Shiro 3 is the latest game in a series of Japanese vertical-scrolling shoot-'em-ups, a genre that is sadly almost extinct in modern gaming. The last in the series was brought to Western audiences a few years back as Castle Shikigami 2, and the third will wing its way to the Nintendo Wii sometime soon.

Instead of the planes or mechs that you'd pilot in most other vertical shooters, the Shikigami no Shiro series features flying people--sorcerers, to be precise, who can control powerful familiars known as Shikigami. Armed with the Shikigami, these sorcerers take to the skies and are, for all intents and purposes, heavily powered flight vehicles. Despite the fantasy anime theme, once in the sky Shikigami no Shiro 3 plays just like your typical shooter. You maneuver around with your character, fire off ammo while dodging increasing numbers of enemy ships and projectiles, and occasionally drop a massive, screen-clearing bomb when the opposition gets too tough.

Shikigami no Shiro 3 features eight playable characters, each of which have different strengths and weaknesses that translate most directly into the type of fire you can lay down onscreen. The particular single-player game mode we played at TGS allowed us to choose two characters that we could switch between by pressing the B button on the Wii Remote.

Unfortunately, Shikigami no Shiro 3 doesn't make use of the Wii Remote's motion-sensing capabilities. Players hold the remote sideways, use the D pad to navigate, and the 1 and 2 buttons to fire attacks. Controlling the game in this way gives it a decidedly old-school feel, which is apt, considering that the fast and furious action onscreen is reminiscent of the shooting genre's heydays.

Vertical shooter fans in Japan can look forward to Shikigami no Shiro 3's release on December 13. A release in Western markets is planned, but no firm date has been fixed as of yet. 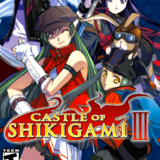