Sony's highly original PlayStation Portable game is making the jump to the PS3. We got a hands-on at Sony's pre-TGS demo.

TOKYO--Even a year after release, Loco Roco remains one of the quirkiest, most original games on the PlayStation Portable. Its strength was that it took advantage of the console itself, particularly with the pitch-perfect shoulder button control system. So when it was announced that a PlayStation 3 version was in the works, many assumed that the world-tilting mechanism would transfer to the motion-sensitive Sixaxis controller. However, despite building such a system at the alpha stage, it turns out that the designers have opted for something else entirely. We spent time finding out what when we got a hands-on with Loco Roco Cocoreccho! at a special preview on the eve of the Tokyo Game Show.

As we mentioned, the big change for PS3 Loco Roco is the control system, which has received a complete overhaul. Instead of tilting the world to move the Loco Roco characters around the level, you now control a butterfly (the Cocoreccho of the title). Loco Roco are attracted to the butterfly, so you use your influence to guide them around the levels, solving puzzles and finding secrets along the way. That's not to say that the Cocoreccho is a static guide, though, as you can interact with the Loco Roco and the world, too. Press circle and the Loco Roco will move faster and jump higher, meaning that they can access hidden or difficult to reach areas. The butterfly can also interact with some objects in the world, such as gates, branches, and puzzles, if you physically shake the Sixaxis controller while hovering over them.

As PSP Loco Roco players should have figured out, this interface means that the game is massively different from the previous game. However, those same people should be pleased to hear that the rest of Loco Roco Cocoreccho! is immediately recognisable. The characteristic theme tune has made it over to the PS3 game completely untouched, and while that's no bad thing given the quality of the original soundtrack, it would have been nice to hear some new music. Visually, the game shares the same style as before, although the one level that's being released over PlayStation Network is rather plain. We hope that there will be some of the icy levels from the PSP released in future, although nothing has been announced as yet.

Speaking of levels, another big change for the PS3 version is in the sheer size of each world. They're now so big that they feature a map, which can be accessed by holding down the square button at any time. Levels are segmented by gates that can be opened by getting a certain number of Loco Roco to them, at which point the gate opens and another part of the level is opened. This large open design means that levels take longer to complete, up to an hour for novices, but it also means that you can play the game in short bursts and come back for frequent visits.

The size of the levels also means that you'll have to control more Loco Roco than before, and you could be juggling up to 200 by the end of the level we saw. You also collect Loco Roco in a new way, and instead of eating radishlike vegetables you have to awaken dormant Loco Roco by sending others to their location. They also appear on branches, and you'll need to use the butterfly and the Sixaxis controller to shake them free. Also, instead of having different-coloured Loco Roco on each level, Cocoreccho! now mixes different groups of Loco Roco in the same level.

The demo that we played of Loco Roco Cocoreccho! was the finished version, as it is being released in two days from the date of writing, on September 20. The final release will include the level that we played, but it's clear that more will be released at a later date over the PlayStation Network. The new control system certainly takes some getting used to, but we're optimistic that it will prove to be just as addictive as the PSP original. The game's release coincides with the Tokyo Game Show, so keep an eye on the PlayStation Network later in the week to find out more. 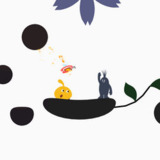