Sega's new action RPG is like Pokémon with dinosaurs, where fights are decided by rock-paper-scissors. If that's not enough to convince you that this could be the best game ever, read our preview for more.

One of the more surreal sights at this year's Tokyo Game Show is at the Sega booth, and that's saying something given that the show is a hotbed for crazy ideas. But even in Japan, we doubt that there's ever been a game where dinosaurs battle it out over rock-paper-scissors before, blasting lasers at each other from their eyeballs. That's what the new game Dino King is all about, though, and we managed to indulge ourselves in this wacky world in a fun but brief demo.

You play as one of two young characters, a blonde or a brunette, and you start by having to excavate a dinosaur skeleton from the ground. Predictably, this means using the stylus to chip away the surrounding earth, and the idea is to expose as much of the fossil as possible before your pick breaks. Once excavated, the dinosaur comes alive and is added to your collection.

This is where the game turns into a traditional top-down role-playing game, although the demo showed off very little of the exploration in the game. After talking to a couple of peripheral characters in Japanese, we encountered the enemy of the piece and entered our dinosaurs into battle. The whole environment changes to a volcanic mountain where the beasts can do battle, and it's your job to knock the enemy dinosaur's health down by entering a series of rock-paper-scissor battles. However, you can, also choose to run away from the battle or change your dinosaur, but we were unable to do the latter in this limited demo.

The battle system works by limiting the number of times you can use each of the three options. Although it was in Japanese, we were told that hints and tips were given at the bottom of the screen such as, "He's likely to play the same hand as before," so if you've been paying attention, you should be able to win. In the case of a draw, the two dinosaurs charge each other head-on and each lose a little energy, while a winning dinosaur is able to unleash a full-on energy bolt on the loser.

The demo at TGS was incredibly short, with only two dinosaurs to fight against, but it was enough to pique our interest in how it might turn out. It's clearly aimed at a young market because the battles are very easy to win, but we hope that the full game will offer some ingenuity and challenge. The game is out in Japan on November 22, and while there's no news of a US/European release, we think there's a good chance it will make an appearance. Rest assured that we're ready to wrestle anything--man or beast--to bring you more info when we get back from Tokyo. 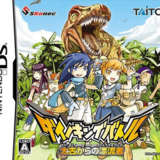