We try out SNK's DS update of one of its handheld gems.

TOKYO--Back when SNK was trying to take a stab at the handheld market, the Japanese developer threw its weight behind the Neo Geo Pocket and Neo Geo Pocket Color. Though powerful and versatile challengers to Nintendo's Game Boy, the systems never found widespread success, but they were home to a number of great titles. One of the most beloved of these is Card Fighter's Clash, a card game featuring SNK and Capcom characters in a battle to the hit-point-depleted death. Though it appeared the game would just be one of the many footnotes in game history like the Neo Geo Pocket itself, SNK has decided to give the title a new lease on life with a new version on the Nintendo DS. SNK had a demo version of the game playable in its TGS booth, and we jumped on it to see how it's looking.

The demo drops you right into a battle, which appears to follow the same basic flow as the original game, with some DS-enhanced additions to the experience. You and your opponent will roll dice (by tapping them with your stylus) to see who'll go first. Once that's decided, you'll draw a hand and both take turns laying down cards, featuring various well-known and not-so-well-known Capcom and SNK characters. As with the previous game, it takes a turn or two to be able to start using the cards you've laid down. As battle begins, you'll be using your cards to attack your foe and also to defend against his attacks. Each card will have varying hit points and special abilities, as well as a cost associated with using it based on the SNK or Capcom character depicted. At its most basic, the game is a match of rock-paper-scissors, with opponents trying to overwhelm each other's hands. The outcome of each confrontation hinges on the hit-point value of both player's cards. Once a card's hit points are gone, your own personal stock of hit points starts being depleted. The player who runs out of health first loses.

There's some depth to this system, as certain cards have unique attributes that include greater HP, attack power, or special abilities. You can also stack cards with others to buff up their HP or attack power. Unfortunately, the language barrier was in full effect for this one, and we're reasonably certain we missed out on some of the finer nuances of combat. The one thing that's clear is that dueling is more complicated this time out since it appears that colored gems can now be tied to cards and are needed to perform some actions.

As in the previous game, you'll earn new cards by winning battles. You'll be able to replace current cards in your deck with your winnings if they're better and eventually make entirely new decks once you've won enough. The game lets you use the D pad or DS touch screen to manage your deck.

The presentation of this game is considerably busier than its predecessor and uses both screens to show the cards lain down by you and your opponent. The visuals are fairly bland until you start getting into battle, which focuses on the cards featuring a ton of familiar faces from SNK and Capcom franchises. Besides the franchises tapped for the original game, such as Fatal Fury, King of Fighters, and Street Fighter, the DS game will be bulked up with newcomers from recent franchises such as Devil May Cry. The art for the cards is in line with the style of the original game, so expect cute-looking renditions of even the toughest characters. In addition to the cast of characters on the cards, Card Fighters DS features an original cast of characters for the game's story, which serves as a framework for the many battles you'll face.

Language challenges aside, the game seems like it should handle fine once you get the system down. We're hoping the additions to the combat system don't needlessly complicate the smart and accessible system from the original. Though the TGS demo gave us a fair sampling of what to expect from the game's combat, we're very curious to see how much SNK is going to take advantage of the DS's Wi-Fi capabilities. Though local versus matches and card trading are obviously no-brainers, we'd be very down to see if the Nintendo Wi-Fi Connection will be supported for some international card fighting. SNK vs. Capcom: Card Fighters DS is slated to hit Japan later this year and early 2007 in the US. Look for more on the game in the coming months. 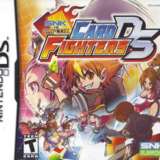