If you're a fan of rails (and seriously, who isn't?), then this PlayStation 3 train simulator might be precisely what you're after.

TOKYO--Your console can't possibly be successful until it gets some kind of esoteric Japanese train simulator. Everyone knows that, including Sony, who is showing off a train sim from Ongakukan called Railfan. As former hobos ourselves, we're big fans of riding the rails, though this one puts you in the conductor's chair. Oh, and the visuals are startling.

There are three rail systems to play on in Railfan. Some of Tokyo's JR system is modeled in the game, as is a track from Kyoto to Osaka. Chicago's Brown line is also included. The goal of the game seems to be to run the train properly by making sure you get to your stops on time and stop properly at each one. The controls are pretty simple--you just need to control the train's throttle.

Of course, there have been a billion different train sims in Japan, many of them courtesy of Taito's Densha de Go!! series. What sets Railfan apart is its graphics. When we first laid eyes on Railfan, it was difficult to tell if the game's graphics were being rendered polygonally or if we were watching cleverly filtered streaming video of the actual train lines. We kept staring, and we still couldn't easily decide, but it definitely seems to be some sort of live video. The game's camera shakes just right to give the feel of a moving train, and it cuts to nice-looking overhead views of your train, too.

Let's cut to the chase, though. This is a Japanese train simulator, which usually means it has zero chance of coming to the States. Plus, you're controlling a train. That means you get to go forward and maybe, if you're lucky, occasionally back up. So the gameplay didn't exactly blow us away. But it certainly looked cool. Railfan is scheduled for release in Japan later this year. 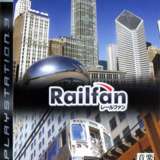