Off we go, into the wild blue yonder, with this Japanese flight sim for the PSP.

TOKYO--Pilot Academy, known as Pilot Ni Narou! Flying All Stars in Japan, is a fun and surprisingly compelling flying game for the PlayStation Portable. We had a chance to check out the game for ourselves on the floor during the last day of the Tokyo Game Show and came away impressed with its ease of control, its sharp graphics, and the underlying physics of it all, which just seem right.

Before playing the game ourselves, we got a chance to watch a few native speakers play the game, and we gleaned that you won't just be flying single engine Cessnas in Pilot Academy. On the military side, you've got fighting planes represented all the way from World War I biplanes, through World War II , and on to today's modern jets such as the F-16. The game will include a number of dogfighting missions where you can battle it out against computer-controlled enemies (we're not sure if you can dogfight wirelessly with your PSP-owning friends, however).

If you're looking for a more peaceful way to spend your flying time, Pilot Academy is sure to please as well--in addition to the aforementioned single-engine planes, you'll be able to pilot massive jumbo jets, which, it must be said, control much differently than the smaller, zippier aircraft.

To quickly grasp the controls of Pilot Academy, the game features a gentle learning curve of missions that start from the relatively easy, such as piloting your small plane through a pair of hoops suspended in midair, to the devilishly difficult, such as dealing with harsh wind and weather conditions. One jumbo-jet mission we tried out was particularly cool--you start off the mission flying headlong into the funnel of a massive tornado. Your job as pilot is to avoid the twister, while at the same time doing it in such a way as to keep your passengers comfortable. A comfort meter on the top left side of the screen changes depending on how drastic a move you make with the plane.

From a control standpoint, Pilot Academy is very easy to get into. The triangle button and the X button control throttle up and down, respectively, and you steer the plane in the air using the analog stick. While you're in the air, or taxiing the plane along the tarmac, you can shift the camera around the plane by pushing left or right on the directional pad, and you can switch to a first-person view by pushing up on the D pad.

Where Pilot Academy finds its challenge is not only through the different missions, but through the different ways the planes handle. Smaller, lighter planes are generally more agile but also far more susceptible to strong winds than bigger machines. On the other hand, while the jumbo jet is a more stable flyer, you need to plan your moves well in advance, because it doesn't have the capability to make quick turns.

Pilot Academy is already out in Europe and Japan, and the game is tentatively slated for release in the States in 2007. We like what we've seen of the game so far, if only because it brings back fond memories of the old PlayStation 2 game Sky Odyssey (look it up if you've never played it). We'll be bringing you more on the game in the coming months. 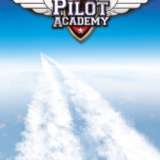