Nintendo DS owners will be taking on a force that's bigger and nastier than soldiers or monsters: the Japanese economy.

TOKYO--Metal Gear series creator Hideo Kojima revealed during the Tokyo Game Show that his development team is working on a new game for the Nintendo DS--but it's not the usual type of game from Kojima Productions.

Following the trend of the many "training games" being released on the DS, Kojima said that his team is working on "Kabushiki Baibai Trainer Kabutore" (Stock Transaction Trainer Kabutore).

The game teaches players the basics of stock trading, using real Tokyo Stock Exchange market data from the past five years. For novice traders, the game features step-by-step lessons in stock-market transactions, including a lecture mode and a story mode. For those well versed in the ups and downs of stocks, there's an expert mode, which lets the game function as a market simulator.

"Video games have been changing during the past one to two years. The recent trend is toward training software, which brings affluence to life rather than drama," said Kojima during his stage appearance. "Although we've been releasing games for the hardcore audiences up until now, we're really about taking on new challenges."

Kabushiki Baibai Trainer Kabutore seems like the type of game that would only come out domestically in Japan. But with games like Brain Age: Train Your Brain in Minutes a Day also selling well across the Pacific, there's always the possibility that a localized version might do well too. Screenshots and a trailer are available from the Japanese-language TGS section of Kojima Production's Web site (click on the "Japanese" link and then select the bottom left beverage in the vending machine). 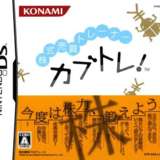