Annihilated Empires? Sounds serious. We take a look at this upcoming RTS at TGS.

TOKYO--Heroes of Annihilated Empires is a mere month or so away from release, but that didn't stop GSC Game World from showing it off at TGS, despite that the game is a PC title in a sea of console games. Tucked away in a small corner of the booth here, Heroes was fully playable and localized to English in the version on display, which was a refreshing change from the endless frustration of trying to interpret the plot of demoes for Japanese role-playing games.

Anyway, we took over the demo with the control of a hero unit, who loudly complained about the druids who had sent him through some kind of magical teleportation field. He and his armies had been scattered throughout their destination, leaving him temporarily alone and forced to wander around to find them.

Unfortunately for us, we quickly ran into a horde of roaming monsters, who quickly chopped off most of our hero's health. We attempted to turn the tide a bit by using magic; the hero has a number of spells initially available to him, including an ice ball that damages all enemies in front of him; the Eye of Storm, which calls up a ball of lightning that zaps nearby enemies every few seconds; and the humorously titled Call of Nature, which summons in a group of dryads to fight on your side.

With the help of these magical attacks, we fought off the enemies, which appeared to be goblins, and regrouped with a team of our soldiers, consisting of a few knights and some archers. Unfortunately, they were quickly and completely demolished by a group of spider enemies that we found in another direction, and while attempting to have our hero unit retreat, he ran into a couple of large lizards and a flying dragon and was killed. Perhaps we're simply terrible at real-time strategy games, or perhaps we missed something obvious about the game, but we came away from it with an impression of above-average difficulty.

As far as gameplay goes, Heroes of Annihilated Empires seems to be a pretty standard RTS, which abides by the commonplace standards of the genre, such as clicking and dragging a box around your units to select all of them, and so on. Graphically, it looks fairly nice, with some well-detailed units and enemies, despite their small size. Everything is rendered in classic 2D style, which some may find off-putting, but it runs well and looks nice, so this shouldn't be too much of an obstacle for diehard RTS fans.

Stay tuned to GameSpot for more information on Heroes of Annihilated Empires as it nears its release in late October. 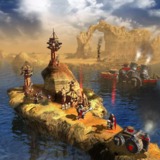