We go head-to-head with a low-tech pugilistic robot as we check out D3's upcoming fighter.

TOKYO--Earlier today, during a visit to D3's Tokyo Game Show booth, we couldn't resist checking out one of the latest titles in the Simple 2000 budget games series: The Robot Tsuku Rouze! - Gekitou! Robot Fight. We were drawn to the game because, as we were walking by, we saw two extremely low-tech robots doing battle in a pugilistic fashion, and in a city where images of giant mechs and Gundams feel like they're around every corner, it was a welcome change.

When our turn came to get our hands on Gekitou! Robot Fight we were disappointed to find that the game isn't just about fighting robots; the game also boasts a bunch of human characters who insist upon having lengthy conversations with each other, particularly in the portion of the game at which our session got underway. Fortunately, one of the many gracious D3 booth attendants spotted us despondently clicking through the conversations and asked if, by any chance, we were hoping to fight with some robots. An enthusiastic nod of the head and a minute or so later, we were controlling a blue robot facing off against a yellow robot on a raised platform in what appeared to be a laboratory.

The robots in Gekitou! Robot Fight handle every bit as well as you'd expect a robot constructed from old kitchen utensils and vacuum-cleaner innards to. The left analog stick was used to move forward and backward and to turn on the spot, while the right stick was used to sidestep. Our opponent performed cartwheels in an attempt to outmaneuver us from time to time, but we never figured out how to make ours do anything like that.

We were able to throw left and right punches using the L1 and R1 shoulder buttons respectively, while harder but slower punches were controlled using the L2 and R2 buttons. Holding down two buttons simultaneously had some occasionally interesting results (such as our robot outstretching both of its arms and then spinning around), but none of the controller's four face buttons appeared to serve any function.

Our battle was contested over five rounds in a first-to-three format, with two of our wins coming by way of knockout and the last coming through a ring-out. The game's pacing was slow, the controls were unresponsive, and the visuals were anything but pleasing. There was something strangely charming about Gekitou! Robot Fight, but don't get too excited, because the odds of this one ever being released outside of Japan are practically zero. 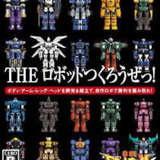